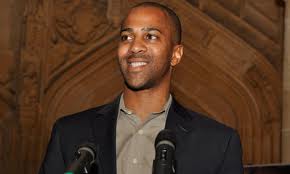 The winner of the Caine Prize was announced yesterday.    I admit until I read about this in a Tweet from one of the great people I follow now on Twitter I did not know what this was.    The Caine Prize is considered Africa's Leading Literary award.    Entry is open to anyone from an African country and the form of work is the short short.   The patrons of the prize include three African winners of the Nobel Prize for literature, Nadine Gordimer, J. M. Coetzee and Wole Soyinka.    Chinua Achebe, winner of the International Man Booker prize,  is also a patron.    The award comes with 10,000 British Pounds  and is given out annually at a celebratory event in Oxford.     The short story is seen as a continuation of the tradition of African story telling which is one of the reasons the award focuses on that genre.    The award began in 2000.

Olufemi Terry is from Sierra Leone.   (You can see his photograph and learn more about the award at the official web page for the Caine Prize).     There is very little biographical data on Terry on this web page and I could not find any in a quick search.   He is young and hopefully has a long writing career ahead of him.

"Stick Fighting Days" is set in and around a huge garbage dump in an unspecified African city.    The lead character is 15, has no sign of having any family or home, and prides himself on his skill with stick fighting.    Stick fighting is a form of martial arts using a long narrow hand held stick.   (I learned about it from this article.)
Prowess at stick fighting is the basis for the self esteem and Identity of Raul, the lead character and narrator of    "Stick Fighting Days".    Terry does a very good job in the creation of the world inhabited by Raul.   He does not make use of exposition but rather lets us see the world through the narrator's eyes.   Raul has his rivals in stick fighting whom he respects as fellow warriors.    Raul lives from  food he finds in the garbage dump.     There is a long literary tradition of detailing the effects of drugs on the consciousness but "Stick Fighting Days" is the first work I have read that focuses on the effects of glue on the psyche.

I think one of the deeper aspects of this very well done story is the sense that Raul and his fellow stick fighters are the descendants of once proud warriors who were the creators of strong cultural traditions in which one could take pride.     Proud warriors no more, they are considered old at 17 and violent capricious ends will find most of them.    I do not want to give away the ending of "Stick Fighting Days" but it was very well done, exciting and very cinematic in realization and more than a little shocking    The language is simple and direct.    We feel a sense of loss when we realize that all of the characters in this story -and their real life models-will probably end up with short pointless lives.

A good short story creates a world whose logic we can understand and enter into if we wish.   The world of  "Stick Fighting Days" may be very far from our world and through a well written story Terry has brought it to life for us.

You can read the entire story (as well as all the other short stories that were short listed for the prize) here.

Many thanks for highlighting and the link to this interesting prize winning story,i'll give it a read later.

Congratulations to Olufemi Terry, 2010 winner, and the other nominees! Olufemi Terry's 'Stickfighting Days', along with the four other nominated stories and stories written at this year’s Caine Prize workshop, is published in the book Life in Full and other stories, now available from New Internationalist Publications (http://www.newint.org/publications/caine-prize-2010/). To read about the winning story, please visit http://www.newint.org//publications/news/2010/07/06/caine-prize-2010-winner-announced/

great review Mel, I'll bookmark the link and print the story one day...I don't like reading through computer, so I need to print that 1st.

I love trying new authors from around the globe

Thank you for explaining the reason for the Caine Prize.