The Dybbuk by S Ansky (1914). A Drama in Four Acts - The Yale Yiddish Literature Project

A very important work in the canon of Yiddish literature. 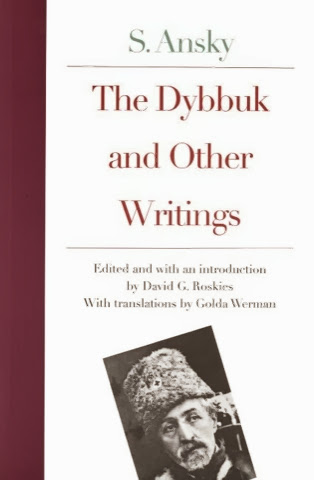 This project was made possible by a generous gift from The Yale University Press.
S. Ansky (1863 to 1920, Ukraine) is one of the most famous of Yiddish language dramatist.
In Jewish mythology, a dybbuk (Yiddish: דיבוק, from Hebrew adhere or cling) is a malicious possessing spirit believed to be the dislocated soul of deceased person.  S. Ansky dramatized just such a possession in his famous play, The Dybbuk.  (The play is considered the immediate cultural source for movies like The Exorcist.)  Normally a dybbuk will enter the soul of a living person because it is dissatisfied with the course of events after its (their) death and are seeking to bend the will of the living as the price for releasing the possessed individual.   This is exactly what happens in the play.  The Dybbuk deals with deep matters of the teachings in writings of the tradition of the Kabbalah.  There are speeches by learned Rabbis that go into great details concerning spirit possession and its remedies.
A young Talmudic scholar has fallen madly in love with the daughter of a wealthy man who has another son of a rich man picked out for his daughter. There wedding had been promised long ago.    The man in love dies from shock.  The woman goes to the cemetery to invite her deceased mother to the wedding ceremony, set for that morning.  She stops by the grave of the man who died from love for her and somehow she leaves "changed".  At the wedding ceremony she shouts out when she sees the man she is to marry, "you are not my bridegroom" and refuses to marry him.   She returns the cemetery, where she had stopped at the grave of a murdered couple the night before, and is followed by many from the wedding party.  In a male voice she announces that that her true love has returned to claim her as his bride. The Rabbi says she has been possessed by a dybbuk.  The rest of the play deals with the various attempts to exorcise this malicious spirit from the woman.
The Dybbuk was to me of greatest value for its incorporation of Yiddish lore and customs into the play.
It will only take you at most two hours to read it and I am defiantly glad I did.  I would enjoy seeing it preformed but there is not a big demand for Yiddish drama where I live so I guess I probably won't.
There was a Polish Yiddish language movie based on the play released in 1939. 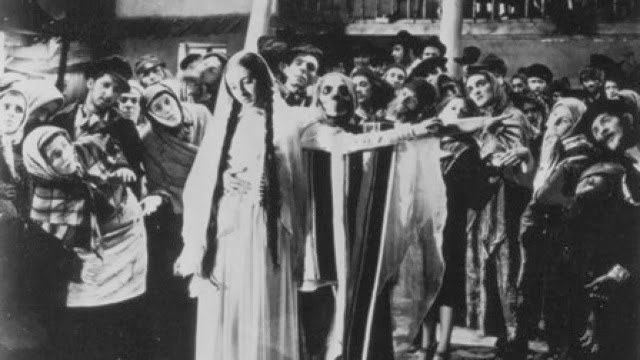 There is some background information on Ansky and Yiddish literature in my post on his short story "Go Talk to a Goy".  I will, I hope, post on additional short stories in the beautifully done Yale Collection  of his works.
Mel u