Wigs on the Green by Nancy Mitford 1935 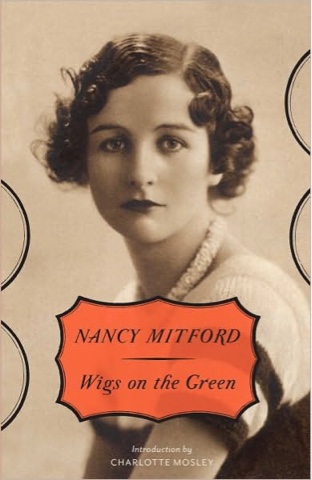 Novels of Nancy Mitford
In order to really appreciate Wigs on the Green,  it helps to know a bit of Mitford Famiily history.  Two of Nancy's sisters, Diana and Unity were strong sympathizers with Nazism, knew Adolph Hitler well and greatly admired him. In fact her Mother, their brother Tom, even Nancy at times in her life, expressed admiration for Hitler.  Diana divorced an heir to a great fortune  as a result of her affair, and eventual marriage to Oswald Mosley leader of the British Union of Fascists.  She and Mosley were imprisoned during WW Two as potentially dangerous.  Unity was totally in love with Hitler, vehemently anti-Semetic and shot herself when German and England went to war.  Numerous British and European aristocrats, the Mitfords were from and old Nobel family going back to the days of the Normans, supported the Nazi party as an alternative to communism, growing in power in England in the 1930s before they knew of the full horror of Hitler's plans.  The Mitfords wanted Germany and England to align and rule Europe and keep out the communists.  Once the war broke out Nancy became very pro-England and hated the Nazis.  Her father never liked the Nazis, having fought the Germans in WW I he had no love for them and the sympathy his wife, Nancy's mother, had for the Nazis even during the war, ended their marriage in all but name. 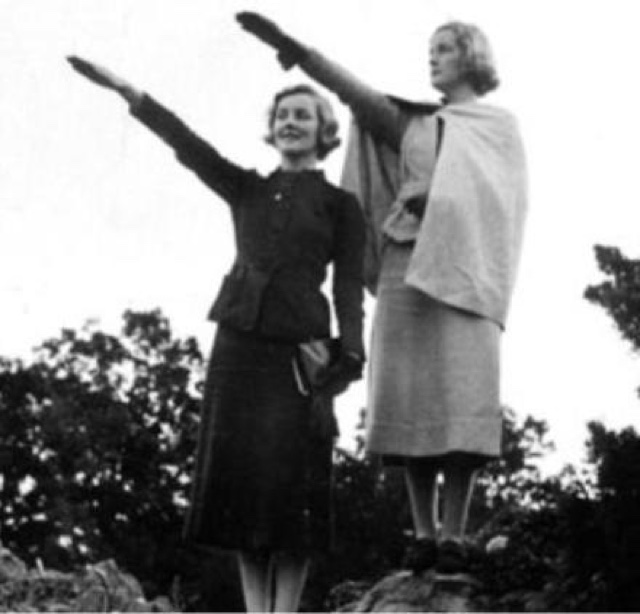 Unity and Diana Mosley
Wigs on the Green is a hilarious take off on Diana's and Unity's involvement with the British Union of Fascists.  As the novel opens Eugenia Maimain, from one of the richest families in England, is giving a speech advocating the overthrow of the government and strongly supporting Captain Jack, a stand in for Oswald Mosley, leader of the Union Jacks, a black shirted fascist organization.  An older lady comes up and tells her it is time to go home as mommy will be worried.  It is her Nanny.  Eugenia threatens to have her body guards from the Union Jscks assault her and accuses the woman of being a communist agent.  It was so hilarious when she finally got in the waiting limo with the nanny.  Anytime Eugenia or Captain Jack is on stage things are delightfully funny.  The satire was so sharp Nancy's sisters stopped talking to her for a while.
There is a kind of convoluted plot involving two male fortune hunters looking for a rich wife who are interested in Eugenia.  This aspect of the novel pretty much falls flat as plot but much of the conversations are just perfect.  The depiction of Eugenia is a comic masterwork of satire, I loved that aspect of the novel. the social satire in laugh out loud funny.
After the war ended Nancy's publisher, hoping to capitalize on the huge success of In Pursuit of Love  and Love in a Cold Climate asked to republish Wigs on the Green and Nancy was at first reluctant as she feared it would offend her family.
Read her famous works first.  I have decided to read and post on all eight of her novels, none are much over 250 pages. 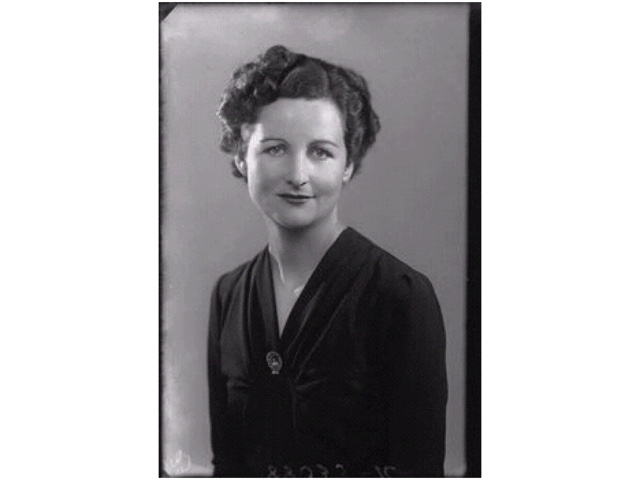