"Imagine you have gone down to the shore and there, amidst the other debris—the seaweed and rotten wood, the crushed cans and dead fish— you find an unlikely looking bottle from the past. You bring it home and discover a message inside. This letter, so strange and disturbing, seems to have been making its way toward someone for a long time, and now that someone turns out to be you. The great Russian poet Osip Mandelstam, destroyed in a Stalinist camp, identified this experience. “Why shouldn’t the poet turn to his friends, to those who are naturally close to him?” he asked in “On the Addressee.” But of course those friends aren’t necessarily the people around him in daily life. They may be the friends he only hopes exist, or will exist, the ones his words are seeking. Mandelstam wrote:

At a critical moment, a seafarer tosses a sealed bottle into the ocean waves, containing his name and a message detailing his fate. Wandering along the dunes many years later, I happen upon it in the sand. I read the message, note the date, the last will and testament of one who has passed on. I have the right to do so. I have not opened someone else’s mail. The message in the bottle was addressed to its finder. I found it. That means, I have become its secret addressee.

Thus it is for all of us who read poems, who become the secret addressees of literary texts. I am at home in the middle of the night and suddenly hear myself being called, as if by name. I go over and take down the book—the message in the bottle—because tonight I am its recipient, its posterity, its heartland."  Edward Hirsch 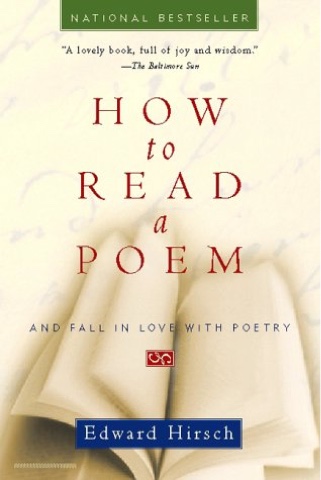 Many years ago I took a class in Victorian poetry.  The class was mostly on technical analyses of the poems.   It took me about twenty years to get over the negative impact of these "lessons".  I do not want to read something just to deconstruct it In a way no one but a small priesthood and their closest acolytes will find of interest.  Eventually I began to read poetry once more.  I read all of Whitman and Yeats, most of Hart Crane, much of Blake, a lot of Ezra Pound, "The Waste Land" and I read over and over the major poems of Samuel Johnson and the  romantic poets. Of course I read the Greeks, as well as Shakespeare. Up until about four years ago I read little works by contemporary poets, thinking why read the work of someone I never heard about when I could spend my reading time on the recognized giants of the culture. Before there was the internet you could not just download and read for free huge amounts of poetry.  You needed actual books!  Then slowly mostly through blog contacts I became aware of contemporary poets I wanted to read. Some I have been lucky enough to interview for my blog or meet in person.  I saw poems as the most intense form of literary communication, going back to prehistory.  I understood in part through the one hundred Q and A Sessions I have done with writers at least in part poets, that their souls were in these works.   Some of the poets were very academically  educated, deeply erudite from decades of reading, some were fresh out of school or pretty much with little formal literary training.  I understood my role in this was to be their reader.  I know this sounds arrogant but so be it.
One lucky day about two months ago Amazon suggested I might enjoy a book about poetry, How to Read a Poem and Learn to Love Poetry by Edward Hirsch.  It sounded intriguing and I acquired it.
Soon I realized this might be the best book I have ever encountered on how to read not just poetry but all literature.  Hirsch helped me bring to consciousness the forces that made me love reading ever since I first mastered it. Hirsch totally loves poetry and he made me understand why. His level of erudition and knowledge is immense.  Through him I now have so many new to me writers I feel I must read.  Already he moved me to read the complete poetry of Wilfred Owen. Achilles weeps.  I will return to Whitman and Yeats with more passion and understanding thanks to Hirsch's teachings.

The heart of Hirsch is in the long quote with which I began this post.  One every page there are beautiful elegant phrases which come from the depths.
Hirsch talks about and very generously quotes from many non-English language poems, in translation. There is a brilliant chapter on African American poetry of the 1930s.  He traces the rhythm of these poems to work songs and that of older Irish poetry to the beat of the oar.  I understood and loved learning this.  To me Hirsch showed the foolishness in the pedagoges claim that "poetry is what is lost in translation".  This cliche is just an excuse for a narrow range of reading by those who teach poetry just for money.
Hirsch includes an extensive reading list and a glossary.  I have begun to read his much longer book, The Poet's Glossery.  i have so far read How to Read a Poem and Learn to Love Poetry twice.  For sure I will be reading in it from now on.
There is a detailed biography of Hirsch here
https://www.poetryfoundation.org/poems-and-poets/poets/detail/edward-hirsch
I very recently did a post upon a wonderful collection of poetry  by Noel Duffy in which I tried to make use of some of Hirsch's ideas.
My post on On Carbon and Light by Noel Duffy
How to Read a Poem and Learn to Love Poetry gets highest recommendation.  It delivers on the promises it makes. There is just a huge amount to be learned from this marvelous book.
Mel u

Your posting, critique, and recommendation are superb! I will soon find and devour a copy of Hirsch's book. Thank you for pointing me in the right direction!

inspiring post: many thanks; i'll have to glom onto this somehow or other...

Mel, I've been reading more poetry. In fact, some might think I have a poetry blog! Your inspiration is inspiring! I will keep these books in mind as they sound very worthwhile.