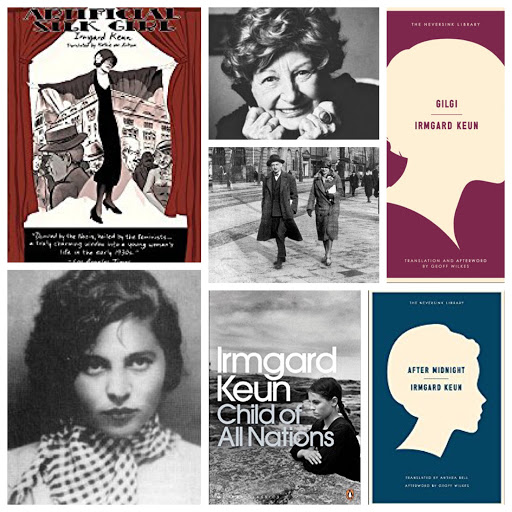 Gilgi is the third novel by Irmgard Keun I have read.  During previous German Literature Months I read her Artificial Silk Girl and then After Midnight.  A cynic might sum up her work as Sex in the City on Alexanderplatz in late Weimar, early Nazi Germany.  All of her central characters in the three novels I have read are young single women trying to survive in Berlin while maintaining some self respect in the face of the pressure of male bosses to have sex with them.  (Sound like the headlines on CNN this morning.)

Gigli works as a secretary in a hosiery factory.  Her boss, thirty years older and of course with daughters older than Gigli and a wife, is pressuring Gilgi to have dinner with him.  She knows a flat out refusal could lead to unemployment and she badly needs her salary.  She agrees to go but has her very alluring friend Olga, not above semi-professional servicing an affluent older gentleman, accidentally stop at their table at dinner and the boss soon forgets all about Gigli.

Gilgi is ambitious, she is learning English and French in classes and trying to safe money to leave Germany.   However, she falls in love with a big talking man  very short on marks.  She winds up pregnant.  Gilgi’s visit to a doctor to get an abortion, criminal offence at the time but common is brilliantly done.

The strength and the pleasure of this novel is watch Gilgi try to survive, the weakness is in the romance.

I enjoyed this novel with the caveat that I am very into the literature and culture of Weimar Germany.  It is Keun’s portrayal of young women in this period that draws me to her work.

To those new to her work I would suggest you start with After Midnight.

I still have one of her novels to read, Child of All Nations, and I hope to read that next year.

IRMGARD KEUN (1905–1982) was born in Berlin and raised in Cologne, where she studied to be an actress. However, reputedly inspired by a meeting with Alfred Döblin, the author of Berlin Alexanderplatz, she turned to writing, and became an instant sensation with her first novel, Gilgi, One of Us, published in 1931 when she   was just twenty-six. A year later, her second novel, The Artificial Silk Girl, was an even bigger bestseller. The rising Nazi party censured Keun, however, and her books were included in the infamous “burning of the books”
in 1933. After being arrested and interrogated by the Gestapo, Keun left her husband and escaped Germany. While wandering in exile, Keun conducted an eighteen-month affair with the writer Joseph Roth and wrote the novels After Midnight and Child of All Nations. In 1940, Keun staged her suicide and, under a false identity, reentered Germany, where she lived in hiding until the end of the war. Her work was rediscovered in the late seventies, reviving her reputation in Germany..