“All the money in the world is nothing but the interest on Judas’s thirty pieces of silver. They’re still in circulation and are multiplying, and Jesus is still being bartered away.“ Johannes Urzidil 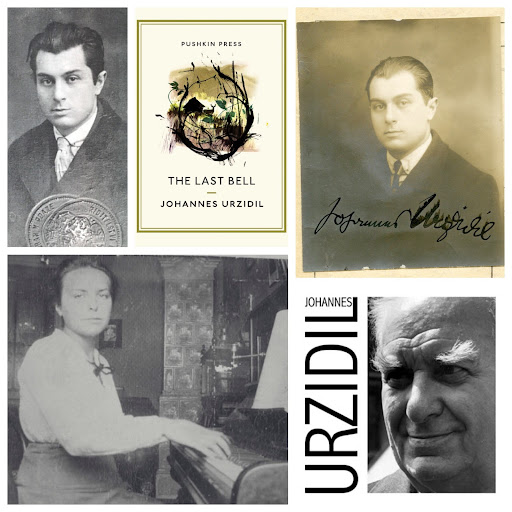 Every year so for during German Literature Month, now in my seventh year of participation, I read a work by a writer I had not even heard about before the month begins and determine I want to read as much of their work as I can.  (For   me this means translated into English and published in a digital edition.)  For sure Johannes Urzidil is now added to my read all I can list.  The just published by Pushkin Press edition of five of his short stories, The Last Bell, is sadly all there is of his work available in translation.

Johannes Urzidil was a German language historian, poet, novelist, and short story writer.  He was born in Prague in 1896, he died in Rome in 1970, while on a speaking tour.  He was friends with Kafka.  Highly educated, from 1922 to 1933 he worked for the German Embassy in Prague, as advisor in the press section.  In 1933 when the Nazis took over Czehoslovakia, he was fired from his job because his mother was Jewish, his father a Bohemian German.  Like so many other writers, his roots were dervived from The Austro-Hungarian Empire.  After being briefly detained he wisely emigrated to England, along with his wife, herself a poet (pictured in my collage).  In 1941 they moved to The United States, settling in The Queens area of New York City.  He stayed there the rest of his life. He developed basic fluency in English and read, among others, Emerson, Thoreau, Twain, and Hawthorne.  He wrote about them in German, he felt he had much higher skills in that language and wanted to do what he could to preserve what he saw as the destroyed Cultural heritage of the old Empire, especially that of Bohemian Germans, largely driven out of Czehoslovakia after the war.

My knowledge of The background of Urzidil comes largely from David Burnett’s very well done introduction to the collection, The Bomb Magazine article linked above and a very comprehensive article in The Atlantic.

The lead story in the collection, which Burnett assembled from several sources, “The Last Bell” is set in Prague around 1933, just as Nazi troops began to occupy the city.   Our main character is a maid, or maybe we should say was a maid.  She worked for years for a Jewish couple, they treated her decently, she tells us her Master, her terms, never made advances on her, as was evidently common.  When we meet her she is seeing them off at the Prague train station.  She is crying, decent employers are hard to find.  They have decided to leave the country, they give her ten thousand marks, a huge sum for her, they can take no cash out of the country, tell her the rent is paid on their apartment for the next six monthes.  All they ask is that she tell no one they have left.  Of course she is initially discombobulated, but she soon begins to relish her new wealth.  In an hilarious scene, she goes to a fancy resturant, orders a dish she has obviously never had before and whose French name she butchers, you can imagine the waiter sneering.  Then, to prove she is “high class” she sends the dish back,claiming it smells “funny”, not realizing it is perfect.  Then she orders apple strudel and sends it back also.

She is initially made just a little uneasy by the uniformed Germans but everyone says only the Jews have to worry.  She invites her younger sister to come stay with her, so she will have someone to lord it over, now that she fancies herself rich.  Time goes by and both of the single but experienced young women find German boyfriends.  A terrible fight does break out between the sisters and two  “black uniformed” Germans, they have learned enough now to both fear the Germans and use their connections to intimidate others.  The younger sister ends up in jail for three weeks but still stays involved with her German Gestapo boyfriend whom she fought with.  As we knew they would , terrible things happen, slowly what is happening to Prague begins to sink in for the older sister.  When the six months of free rent runs out, the Jewish landlord, who lives in the building, fearing the women’s boyfriends tells her not to worry about the rent.

There are lots small touches help make this story a delight.  The lead character, her sisters, the Germans are all perfectly done.

I have left the ending unspoiled.  This is a truly great story.

I hope to get to all of the four remaining stories this month.

Pushkin Press deserves to be highly commended for the many wonderful works they have published in Translation.

Here is the publisher’s description of The Last Bell

“Discover ‘the great troubadour of a Prague forever lost’ – Max Brod
Johannes Urzidil, one of the great writers of the Prague circle, has been woefully overlooked, unlike his friends Franz Kafka and Max Brod. Pushkin Press is delighted to bring you The Last Bell: the first collection of stories in English by Urzidil.
These tales, set against the backdrop of twentieth century life in Bohemia, handle humanity with a wit and originality that demonstrates the author’s ability to understand and celebrate all people.
Urzidil deserves to take his place amongst his friends and fellows in the literary cannon.
In the title story, a miserly maid is suddenly given her employers’ riches while they flee from Nazi persecution. A curmudgeonly clerk becomes enthralled by a Spanish noblewoman’s portrait in The Duchess of Albanera. A widowed villager’s ‘magnetic’ twelve-year-old daughter witnesses a disturbing event in Borderland, and in Where the Valley Ends, an entire village is thrown into civil war over the disappearance of a freshly baked cheesecake.
Playful, often philosophical, always emotionally perceptive, these tales of the ordinary and the extraordinary are vividly told. Now that they are available in English for the first time to not read them is akin to pretending Kafka didn’t exist. Such subtle, intriguing stories are perfect to read at in between times and to reflect on much later.”

Thanks for the reminder that I have this on my TBR. I might get to it later in the month ....

reading so many different stories from different countries, as you do, must give you a global perspective on humanity in general unsuspected or realized by more provincial readers or reviewers... i've thought what a shame it was that there are so many languages; how nice it would be if there was only one... but by the same token, maybe culture would then be too bland...