The Rings of Saturn by W. G. Sebald - 1995- translated by Michael Hulmes 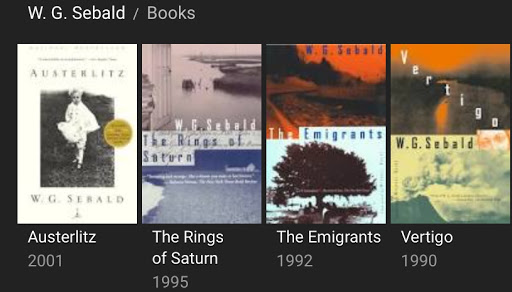 W. G. Sebald was born Winfried George Maximillian Sebald in Wertach im Allgäu, in the Bavarian Alps in 1944. From 1975 he taught at the University of East Anglia, became Professor of German in 1986, and was the first director of the British Centre for Translation. He won the Berlin Literature, Literatur Nord, and Mörike Prizes, as well as the Johannes Bobrowski medal, plus the Los Angeles Times Book Award for Fiction (The Rings of Saturn). New Directions was the first to publish his book here: The Rings of Saturn, The Emigrants, and Vertigo. He died in an automobile accident in Norfolk, England, near his home in Norwich in East Anglia, England, on December 14, 2001. . From The website of New Directions Press.

The Rings of Saturn is the fourth novel by W. G. Sebald I have read.  I have now, for better or worse, read all his fiction.   I wish very much there were more. I felt I somehow related to this work more than the others.  Upon reflection I think this maybe because Sebald has such a unique narrative method that I needed to gradually learn how to read his work.  I also read several essays and listened to lectures about Sebald on Youtube.

I am getting behind in my postings so I will just post a few impressions of the work.  This is a novel masquerading as an account of a walk about the narrator did in England.   As he walks he reflects on the things he sees, his memories of historical events somehow connected to the path of his walk.  To me it seems much of his thoughts were focused on cycles of corruption and decay hidden under something very different.

I found the Work entirely fascinating.  I admit I was shaken up a bit by his reflections on sugar and art:

“In their heyday, said de Jong, the Dutch invested chiefly in cities, while the English put their money into country estates. That evening in the bar, we talked till last orders were called about the rise and decline of the two nations and about the curiously close relationship that existed, until well into the twentieth century, between the history of sugar and the history of art. For long periods of time there was little scope for an ostentatious display of accumulated wealth, and consequently the enormous profits that accrued to the few families who grew and traded in sugar cane were largely lavished on the building, furnishing and maintenance of magnificent country residences and stately town houses. It was Cornelis de Jong who drew my attention to the fact that many important museums, such as the Mauritshuis in The Hague or the Tate Gallery in confectioner to the Viennese court, which Empress Maria Theresia, so it is said, devoured in one of her recurrent bouts of melancholy.”

Sugar plantations employed huge numbers of slaves.  Under brutal conditions, the average life expectancy of a slave was two years.  The great art of Europe arose from this misery.  I saw the cosmic truth in this.  Beauty, art, culture, great treasures, magnificent buildings in London, Amsterdam arose from misery.  I wondered how this connects to Literature.

extraordinary... i've heard of this book but it sort of sank out of sight; which should have informed me it was a good one. i want to read it not only for the walking(i like walking and bike riding) but for the original pov... tx for the post...

Mudpuddle. I hope to one day know your thoughts on Sebald. Thanks as always for your comments

Oh, that's fascinating, the link between sugar and art. I want to know more about this as well! (By the way, I cannot seem to leave a comment on the Lorrie Moore short story, but I have read that collection and should go back to that story. I remember when you posted about Mister C. Five years. It probably both seems like a long time ago and also not so long ago. I know that feeling.)