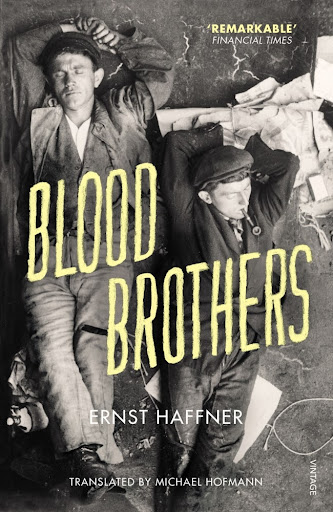 “Alexanderplatz in the hours between 9 p.m. and midnight. Where to start in the confusion of humanity? Prostitution in every form. From the fifteen-year-old girl, just slipped out of welfare, to the sixty-year-old dreadnought, everyone is feverishly on the make. Male prostitutes, flocks of them, outside the toilets, in bus and tram stops, outside the big bars. Homeless of both sexes sniff around. Loiter, move off. Aimlessly. Sit on a pile of planks for the new underground station. “Move along now!” Police patrol. Move along, sure, where to? It’s almost tempting, the looming bulk of the police HQ on Alexanderplatz.” From Blood Brothers

Blood Brothers by Ernst Haffner was initially published in 1932, the Nazis burned it in 1933.  It was first published in English in 2016: having been largely forgotten.

Blood Brothers is set in very late Weimar Berlin.  It follows the lives of eight young men, all members of the same gang.  Berlin is a city in extreme turmoil, dangerous and corrupt.  The young men seem largely fatherless, Germany suffered huge losses of fathers in WW One.    If their mothers are around, they are cheap prostitutes.  The boys have no homes. Everyday is a struggle to survive, get food, find a place to sleep.  They engage in all sorts of petty criminal activity.  Sex for sale is the order of the day in Berlin and the boys do young hookers when ever they any extra money.

Berlin in 1932 was the destination for gay sex tourists.  The boys rent themselves out to “distinguished gentlemen” when the opportunity arises.  They are in fear of the corrupt police, spend time in juvenile facilities, move up for a while to car thieves.  Two of the boys start a successful enterprise buying and selling shoes, of course it goes bad.

Blood Brothers gave me the feel for the mean streets of Weimar Berlin, something exciting happens in almost every chapter.  The boys are well individuated.  Everybody on stage seems real.  It is a young displaced totally uneducated look at Berlin we are given, through the consciousness of the boys.

ERNST HAFFNER was a journalist and social worker. His only known novel, Blood Brothers, was published to wide acclaim in 1932 before it was banned by the Nazis one year later. In the 1940s, all records of Haffner disappeared. His fate during World War II remains unknown.  There is circumstantial evidence to suggest the Gestapo disappeared him.

MICHAEL HOFMANN has translated the work of Franz Kafka, Joseph Roth, Hans Fallada and many others. In 2012 he was awarded the Thornton Wilder Prize for Translation by the American Academy of Arts and Letters. He is the author of several books of poems and essays, including Where Have You Been? (2014). He lives in Florida and London.

I highly recommend this book, easily read in three hours, to anyone interested in Weimar Germany.