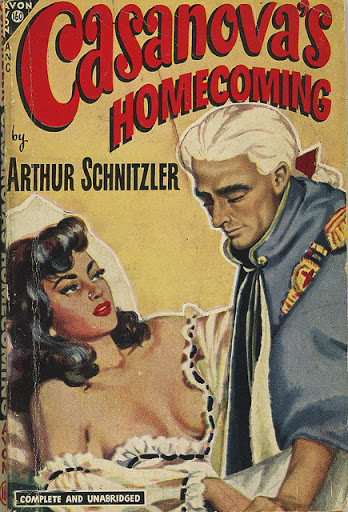 Casanova’s Homecoming is a sad work, in more ways than one.  When we meet Casanova the man once considered Europe’s greatest lover, seducer of duchesses and their dishwashers, with an encyclopaedic knowledge of the brothels of the continent, who considered it ok to seduce, near rape young girls (sounds like an American senator) and justify it by paying them afterwards is long past his physical prime at fifty three, much of his money gone.  He still has a voracious sexual appetite and uses every trick he knows to get women in bed.  Sometimes he pays as little as he can, sometimes he pays way more than required.  Sometimes he charms them, seems all the same to him.

His big goal in life is to go back to his old home Venice.  He needs official help as he was once in prison there.  By sheer luck he meets an old friend of his who owes him a great debt.  When Casanova has money he is generous. The man helps him, Casanova years ago seduced and paid both the man’s now wife and his mother.   The man has contacts that can help Casanova be allowed back in Venice and a cute thirteen year old daughter....

This book was probably shocking in 1918.  It can be read in under two hours and I feel it is worth that.  You can download an E book for free.  Schnitzler’s Late Fame is a better work and Casanova in Bolzano by Sandor Marai (1940) is a much better literary treatment of Casanova.

ARTHUR SCHNITZLER (1862-1931) was so central a figure in Viennese literary life in the first decades of the 20th century that the great cultural historian Peter Gay titled his book on the development of bourgeois culture between the Battle of Waterloo and World War I, Schnitzler’s Century.
A Jewish doctor born to a Jewish doctor in the largely Jewish Leopoldstadt quarter of Vienna (a plaque marking his birthplace, a short walk from the Prater, can be seen if you crane your neck on Praterstrasse), his true love was writing. Schnitzler was hugely successful as a playwright by his thirties; his most famous work, Reigen (La Ronde), was first performed in 1897.
His writings, biting portraits of Hapsburg society that were frank in their sexuality, made him both a star and a scandal. - from Jewishcurrents.org

We hope to post on about ten more works by Arthur Schnitzler by the end of 2018.