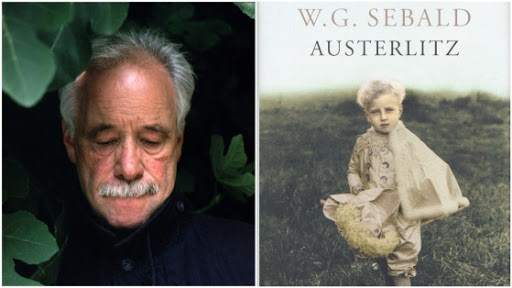 “Curiously enough, one cannot read a book; one can only reread it. A good reader, a major reader, and active and creative reader is a rereader.” Vladimir Nabokov

Prussia, the ruler of Germany, was always an enemy of the intellect, of books, of the Book of Books—that is, the Bible—of Jews and Christians, of humanism and Europe. Hitler’s Third Reich is only so alarming to the rest of Europe because it sets itself to put into action what was always the Prussian project anyway: to burn the books, to murder the Jews, and to revise Christianity."  Joseph Roth, 1933"

If ever a book way over repaid my rereading it was Austerlitz by W. G. I first read this, my first encounter with Sebald, during German Literature Month in November 2013.  I think one needs to devote serious time to learning How to read his unconventional novels.  Since November 2013 I read and posted upon his three earlier novels.  YouTube has several videos of academic lectures on Sebald.   Some were very good.  Some focus on his place in Holocaust Literature, some deal with his photographs, his treatment of memory, and his unique narrative methods.

German Literature Month is winding down and I have a number of more works I hope to read before month end.  I Will just touch upon some few matters that struck me.

I really liked the numerous references to Balzac.  I am currently working my way through his Comedie Humaine and I was thrilled to see the reference to his work.  This is very much a book about two men deeply into the reading life.

I enjoyed the descriptions of Prague and Paris.  I greatly relished the conversations between Austerlitz and the narrator.

Austerlitz is a great work of art.  I hope to reread all of Sebald next year.

I liked the quote from Nabokov; it's true, in a sense: that any book follows a certain logic that becomes predictable with experience...

Does it count that I read the quotation by Nabokov several times, in an attempt to understand it?

Have a wonderful Thanksgiving with your family.