Katherine Mansfield - How the Germans and English Saw Each Other. in 1909, from “Germans at Meat” In a German Pension 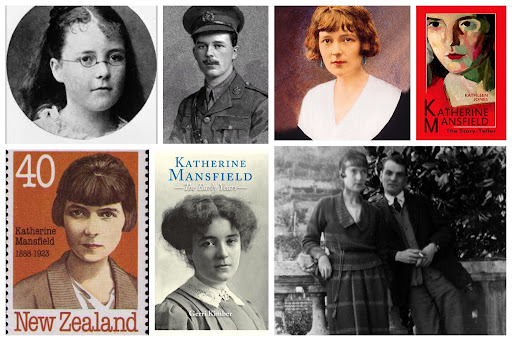 A Wonderful Presentation on The Life of Katherine Mansfield

I have been greatly enjoying focusing on German Literature this month. I thought it might be a bit of fun to see how Germans are treated in works by some of my favourite writers.  Today I will take a quick look at the treatment of how the English saw Germans in 1909, just before World War One Started, and how the English thought the Germans saw them, through the deeply perceptive eyes of Katherine Mansfield.  I will focus on her famous “Germans at Meat”

Her first collection of short stories was derived from the period May 10,1909 to Jan 4, 1910 when she stayed, by herself, in Bad Woishofen, Bavaria, a town famous for the alleged curative power of the waters.  Her mother, visiting from New Zealand brought her their in order for her to be cured of a sexual attraction to women, her mother at once returned to London and on arriving back in New Zealand cut KM from her will. The cure involved bathing and being hosed down.  While there she stayed in an upscale pension that served spa visitors.  Most of the guests were Germans and it is  her observations and interactions with them that helped inspire her stories.  These are her first published in a collection stories and are not among her great works but still are wonderful.

While in Germany she was exposed to Chekhov and Russian literature which deepened her writing.  It is also likely she contacted gonorrhoea, which went untreated for years and which something increased the impact of the tuberculosis which was to kill her.  She returned to London in January, 1910.

“Germans at Meat”, the first story in the collection is set at the dining table during the evening meal at the pension.  The narrator is an English woman, or maybe the Germans cannot tell an English accent from that of New Zealand (small point, I will just assume she is English.  In this story The Germans are o presented as obsessed with eating Meat and are worried they are being over charged by the pension owner.  A Baron, prestigious guest, tells everyone that when he visited England he discovered the English ate huge a hugr breakfast:

“All eyes were suddenly turned upon me. I felt I was bearing the burden of the nation’s preposterous breakfast —I who drank a cup of coffee while buttoning my blouse in the morning. “Nothing at all,” cried Herr Hoffmann from Berlin. “Ach, when I was in England in the morning I used to eat.” He turned up his eyes and his moustache, wiping the soup drippings from his coat and waistcoat. “Do they really eat so much?” asked Fraulein Stiegelauer. “Soup and baker’s bread and pig’s flesh, and tea and coffee and stewed fruit, and honey and eggs, and cold fish and kidneys, and hot fish and liver?”

The narrator seems to be pretend if to be married to avoid unwanted mala attention and nosey questions from the women.  Here is The reaction when she says she is a vegetarian.

““There now, you see, that’s what you’re coming to! Who ever heard of having children upon vegetables? It is not possible. But you never have large families in England now; I suppose you are too busy with your suffragetting. Now I have had nine children, and they are all alive, thank God. Fine, healthy babies —though after the first one was born I had to—” “How WONDERFUL!” I cried.......“Germany,” boomed the Traveller, biting round a potato which he had speared with his knife, “is the home of the Family.”

The German take on the English is that they are a low spirited people, unlike the Germans, of course.

There was constant talk in the papers of a possible impending war between Germany and England.  Given what happened shortly after In a German Pension was published this conversation is very poignant.

“Said the Traveller: “I suppose you are frightened of an invasion, too, eh? Oh, that’s good. I’ve been reading all about your English play in a newspaper. Did you see it?” “Yes.” I sat upright. “I assure you we are not afraid.” “Well, then, you ought to be,” said the Herr Rat. “You have got no army at all —a few little boys with their veins full of nicotine poisoning.” “Don’t be afraid,” Herr Hoffmann said. “We don’t want England. If we did we would have had her long ago. We really do not want you.””

All the Germans turn on her

““We certainly do not want Germany,” I said. “This morning I took a half bath. Then this afternoon I must take a knee bath and an arm bath,” volunteered the Herr Rat; “then I do my exercises for an hour, and my work is over. A glass of wine and a couple of rolls with some sardines—” They were handed cherry cake with whipped cream. “What is your husband’s favourite meat?” asked the Widow. “I really do not know,” I answered. “You really do not know? How long have you been married?” “Three years.” “But you cannot be in earnest! You would not have kept house as his wife for a week without knowing that fact.” “I really never asked him; he is not at all particular about his food.” A pause. They all looked at me, shaking their heads, their mouths full of cherry stones. “No wonder there is a repetition in England of that dreadful state of things in Paris,” said the Widow, folding her dinner napkin. “How can a woman expect to keep her husband if she does not know his favourite food after three years?” “Mahlzeit!” “Mahlzeit!” I closed the door after me.”

For those new to KM I suggest you read her four collections in publication order, less than a Victorian novel in length.   I am fascinated by the person of KM, if you want to learn more about her I suggest you, after completing the stories, read The Story Teller-A Biography of Katherine Mansfield by Kathleen  Jones, Katherine Mansfield-The Early Years by Gerri Kimber, and then an award winning novel by Linda Lappin on the final year of KM’s life, Katherine’s Wish.  Then you can go back and reread her major stories or better still reread them all.

I was deeply touched when I learned the last book Irene Nemirovsky read before being sent to Auschwitz was The Note Book of Katherine Mansfield.

Said the Traveller: “I suppose you are frightened of an invasion, too, eh? Oh, that’s good. I’ve been reading all about your English play in a newspaper. Did you see it?” “Yes.” I sat upright. “I assure you we are not afraid.” “Well, then, you ought to be,” said the Herr Rat. “You have got no army at all —a few little boys with their veins full of nicotine poisoning.” “Don’t be afraid,” Herr Hoffmann said. “We don’t want England. If we did we would have had her long ago. We really do not want you.”  From Germans at Meat

These were rereads for you, is that right? Now you've made me want to reread them as well!

Buried in Print, yes rereads from about eight years ago. KM was the first writer I explored in detail after starting my blog. I ended up being invited to contribute an article to the journal of the Katherine Mansfield society.