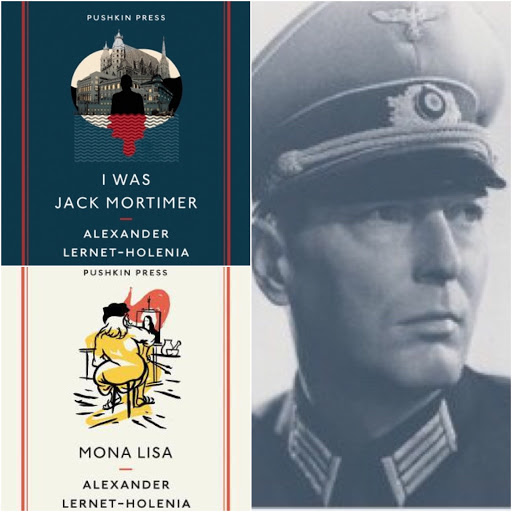 During German Literature Month in 2013 I posted upon an interesting detective story novel, I Was Jack Mortimer by  Alexander Lernet-Holenia.. (He was born 1897,died 1976,both in Vienna).  Today I will post on his published in 1939 novella, Mona Lisa.  I think this work has a bit of historical interest as it is an example of a published with government approval in Nazi ruled Vienna literary work which is actually a pleasure to read.

Mona Lisa can be read in under an hour.  It pretty much a straightforward historical novel.  It is 1502 and the King of France, Louis VII has summoned one of his highest ranking Marshalls to court.  He tells him he is to go to Milan and raise an army which he should then take to Naples to help two French generals whose forces are  being battered by Spanish troops. It very interesting to listen in on the instructions of the king, to learn how the army was to be financed and managed.

As you might guess, France and Germany being at war in 1939,when the book was published, the French end up looking ridiculous and malicious.  Leaving out a good bit, the book is worth an hour, a high ranking French officer goes to the studio of Leonardo da Vinci, hoping he will supply them advanced war weapons.  He shows them a drawing for a flying machine and a submarine, The French officer is disappointed to learn they have not yet been produced.  Then he sees a painting in process, the Mona Lisa, he falls in love with the woman in the painting and demands that he be introduced to her.  He insists Leonardo is lying when he tells him the woman is the late wife of an Italian Nobel.  A huge drama begins, the French man digs up the woman’s supposed burial spot, without proper permission of her husband, the grave is empty and now he sees a huge plot to keep him from his Lady love.  He ends up killing a man over his delusions, a perfectly innocent man, and is beheaded by the Italians. The whole French army is thrown into confusion and returns home, it was all a waste.

Alexander Lernet-Holenia participated in the Invasion of Poland as a reactivated and drafted lieutenant of the reserve, an experience on which he based his 1941 novel Die Blaue Stunde (The Blue Hour) which after the war became known under the title Mars im Widder (Mars in Aries). It has been called "the only Austrian resistance novel" because the plot features an ideologically troubled central character, hints at the existence of active political opposition, and because the Nazi government banned and quarantined the first edition of the book.

Although Lernet-Holenia made himself a lucrative business as a popular screenplay writer during the Third Reich, he was one of the few accomplished Austrian authors who kept his distance from National Socialism, and refused to endorse the Nazi political system or to participate in its notorious blood and soil literary efforts. However, to stay in business he had to make arrangements with the regime, which included becoming chief dramaturgist at the "Heers-Filmstelle" (the audiovisual media center of the Wehrmacht in Berlin, charged with producing propaganda films for military cinemas) after the Polish campaign. Robert Dassanowsky has stated that "[Lernet-Holenia's] early actions in the Reich were confused, appearing to vacillate between naiveté and the often clumsy, often shrewd acts of a survivalist ... a unique but not incomprehensible position." Lernet-Holenia became more outspoken as the war progressed. After his removal from his public position in 1944 he escaped service on the Eastern combat theatre through contrived illness and the help of the resistance network...from Wikepedia

Mel, I wasn't aware of this novella, only the famous painting of Mona Lisa. It sounds like an absorbing, historical read.

Wow, the only Austrian resistance novel: how interesting! Thanks for sharing your post with us.