“A Breath of Lucifer” - A Short Story by R. K. Narayan -1986- first published in Under The Banyan Tree and other Stories 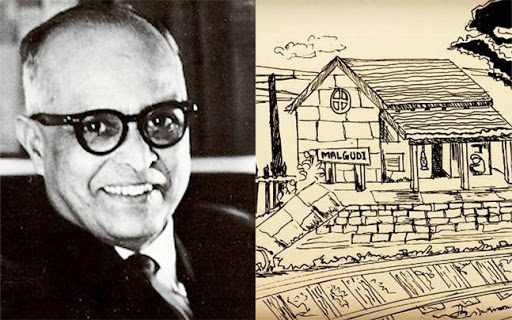 R. K. Narayan (1906 to 2001) should have been awarded the Nobel Prize for Literature.   I have read and posted on all his novels and several of his short stories.  Most of his work is set in Malgudi, India, a South East Indian city born in the literary works of Narayan.  My favourite novel, though I love them all, is A Tiger for Malgudi.  Short story lovers should start with the collection edited and introduced by J. K. Lumpari, Malgudi Days.  Lumpari calls him one of the greatest short story writers of the 20th Century.  I read this story in another collection Grandmother’s Tale and other Stories.  Buy Malgudi Days first.

“A Breath of Lucifer” is set in The Malgudi Eye Clinic.  The narrator has just had eye surgery and his eyes are bandaged.  His family has hired a man to stay full time in the patient’s room, looking out for him.  The fun in the story is in the changing stories told by the caregiver and the thoughts the patient has, not being able to see.  The caregiver, he claims anyway, began his medical work in the army, in Burma.  He likes to talk a lot about his military days.  A woman comes in everyday to give the patient a sponge bath and the man impugns her character.  Something completely crazy happens at the end.

I still have at least twenty Narayan stories to read.

You can watch episodes from  the very well done TV series, Malgudi Days on YouTube.  The stories are in Hindi, some have captions.  It is fun to read a story then watch the TV show based upon it.

sounds uniquely interesting; i'll look for some Narayan in the library... tx...

Thank you VERY much for this post, Mel. This brings back a lot of memories. It's been a while since I read RKN. Maybe, I want to reread 'The English Teacher' or a couple of stories from 'Malgudi Days'. :)

Mudpuddle. I hope you can find some of his work in your local library. Thanks as always for your comments

Deepika. Maybe next year we can do a simultaneous read of one of his novels. Thanks for your comments