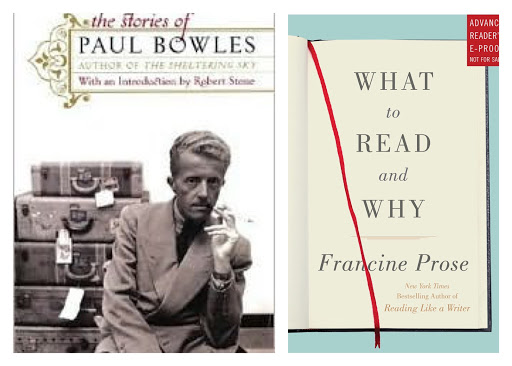 Bowles was a very prolific writer, as well as a composer.  The Sheltering Sky, 1949, is his most famous work.

He published lots of Short stories.

He was married to Jane Bowles, author of Two Serious Ladies.

Francine Prose is the author of twenty works of fiction. Her novel A Changed Man won the Dayton Literary Peace Prize, and Blue Angel was a finalist for the National Book Award. Her most recent works of nonfiction include the highly acclaimed Anne Frank: The Book, The Life, The Afterlife, and the New York Times bestseller Reading Like a Writer. The recipient of numerous grants and honors, including a Guggenheim and a Fulbright, a Director's Fellow at the Dorothy and Lewis B. Cullman Center for Scholars and Writers at the New York Public Library, Prose is a former president of PEN American Center, and a member of the American Academy of Arts and Letters and the American Academy of Arts and Sciences. Her most recent book is Lovers at the Chameleon Club, Paris 1932. She lives in New York City..  from The publisher

““Ten or twelve years ago there came to live in Tangier a man who would have done better to stay away.” This wickedly portentous sentence, which begins Paul Bowles’s story “The Eye,” could just as easily serve as the opening of most of his novels and stories—especially if we expand the list of ill-advised travel destinations to include nearly all of Morocco and a virtual Baedeker of hellish jungle outposts in Latin America and Asia. For Bowles’s obsessive subject, to which he returned again and again, and which he wrote about brilliantly, was the tragic and even fatal mistakes that Westerners so commonly make in their misguided and often presumptuous encounters with a foreign culture. One can hardly imagine a more timely theme, one more perfectly suited to the poisonous and perilous world in which we find ourselves. Yet, strangely, Paul Bowles’s name never (as far as I know) appeared on those rosters of writers one saw mentioned in the aftermath of September 11, classic authors whose work appears to speak across centuries and decades, directly and helpfully addressing the crises and drastically altered realities (terrorism, violence, our dawning awareness of the hidden costs of colonialism and globalization) of the present moment. Perhaps it’s because the books that were commonly cited (War and Peace, The Possessed, The Secret Agent, and so forth) seemed, even at their darkest, to offer some hope of redemption, some persuasive evidence of human resilience and nobility, whereas Bowles’s fiction is the last place to which you would go for hope, or for even faint reassurance that the world is anything but a senseless horror show, a barbaric battlefield.” —Francine Prose

Prose in her brilliant essay talks about how different Bowles approach to the treatment of the West Meets Colonial East them is that that is the of writers like
Conrad and Forester commonly seen as the masters in this area. In these writers the encounters seem to end in an increased understanding, a nearness in a common humanity.  In Bowles is portrayed a kind of lost European or American with no home in his own land who comes to what for him is  mysterious Morocco in search of something or to escape into a void, only to increase the misery of the residents he encounters, mostly as servant and merchants and likely to be destroyed himself.

“The Eye”, which as far as I am aware, can be read only in The Collected Short Stories of Paul Bowles, tells a dark sad story about a man given slow poison by his cook who is found dead with inexplicable ritualistic cuts all over his feet.  A fascinating work.

There are thirty three essays in How to Read and Why, including a wonderful essay about the short story as an art form.  I have just begun to read the collection but expect to get lots of new reading ideas from Prose. I was given a Review copy of her book by the publisher.