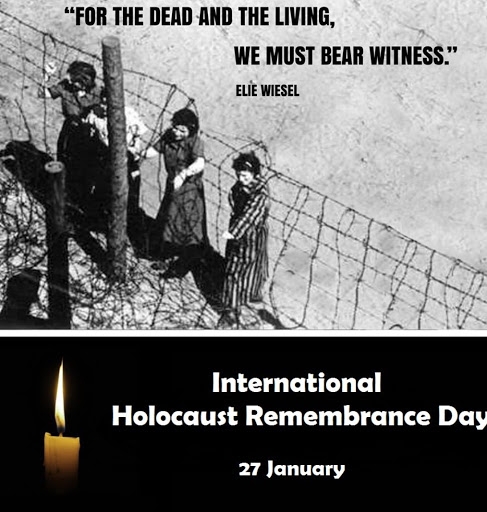 The United Nations has Declared January 27, The Anniversary of The liberation of The largest death camp, Auschwitz, as International Holocaust Remembrance Day.

The Holocaust can be seen in many ways.  I have posted on a number of Holocaust related works as well as classic works of Yiddish literature dealing with The consequences of pograms as well as The Holocaust..  I see the Holocaust as a war on the reading life.  Never has there been a culture more dedicated to the absorption of the written word than that of Central European and Russian Jews.  First the Nazis burned their books, then their bodies.  There is no totalitarian group in the world that is not Anti-Semitic.  Being anti- Jewish and Anti-Semitic should be understood as related but separate things, both repugnant.   To me the Holocaust is made somehow personal by the death at 42 of one of my most beloved authors, Irene Nemirovsky who died a month after arriving at Auschwitz.

Not just Jews were murdered in the Holocaust, about 300,000 Roma people were killed as well as many Jehovah's Witnesses were also murdered.  Holocaust like events did not begin in the 20th century, (I highly recommend Late Victorian Holocausts by Mike Davis)nor did they end there.  Let us hope the worst is not yet to come.

This year I’m observing International Holocaust Day by posting on two very good books, Fatelessness, a novel by the Hungarian Nobel Prize Winner Irme Kertesz who was imprisoned in Buchenwald at age fiveteen.  Adfitionally I want to let everyone know of a very informative perfectly written work of nonfiction by Patricia Posner, a well known Holocaust writer.

The Pharmacist of Auschwitz by Patricia Posner tells the story of Victor Capesius, a Romanian national with an advanced degree in pharmaceuticals.  Before the war he was very sucessful as a salesman in for the huge German chemical conglomerate, I. G. Farben.  Seeing it as an astute career move, in 1935 he joined the Nazi Party.  He became the head pharmacist at the Auschwitz, the largest concentration camp.  There were over 7000 employees and his alleged primary duty was dispersing to them.  He also dispensed in some cases medicine to inmates.  When trains came in bringing more inmates, he particpated in deciding who would be at once sent to gas chamber and who would be used as slave labor.  He also looked for twins for horrible Doctor Mengele.  He personally seems to have done know direct hands on killing.

Caspieus sensed the war would be lost.  He began to steal from the stored possessions of the inmates and very assiduously removed gold from teeth of bodies.  After war, he claimed, as did all, to just be following orders.  However, he was identified as selecting people to die and this put him in prison for 4.5 years.  Posner does a wonderful job explaining the complicated trial.  I was shocked to learn that no I. G. Farben Director was even charged.  There just were to many guilty parties to charge them all.  Technically all 7000 plus Auschwitz employees were war Criminals.  Germans just wanted to get on with rebuilding Germany and the Americans soon wanted Germany as an ally against Russia so many obvious criminals went back to their pre-War Life.

Patricia Posner is a British-born writer who has collaborated with her husband, the author Gerald Posner, on twelve non-fiction books, including 'Mengele: The Complete Story' –a biography of Dr. Josef Mengele; 'Hitler’s Children' –a 1991 collection of interviews with the children of Nazi perpetrators; and most recently, 'God’s Bankers' –a financial history of the Roman Catholic Church. Her work has appeared, among other places, in the Miami Herald, The Daily Beast and Salon. She lives in Miami Beach.

Fatelessness by Irme Kertesz (first published 1975, translated from Hungarian by Tim Wilkerson in 2004) is considered one of the best Holocaust novels.
It tells the story of a 15 year old Jewish boy from Hungary detailing his experiences at Auschwitz.  It is a very rich in details work.  When he first gets there he is told to say he is 16 as all younger are sent at once to the gas chamber.  When a doctor asks if there are any twins in the group, people tell others to deny this.  The boy finds a way of coping.  This is a first rate work.

Imre Kertész, who was born in 1929 and imprisoned in Buchenwald as a youth, worked as a journalist and playwright before publishing Fatelessness, his first novel, in 1975. He is the author of Looking for a Clue, Detective Story, The Failure, The Union Jack, Kaddish for an Unborn Child, and Galley-Slave’s Journal. He was awarded the Nobel Prize for literature in 2002. He lived in Budapest and Berlin. He died in 2016.