Who Will Write Our History - Rediscovering a Hidden Archive from The Warsaw Ghetto by Samuel Kassow, 2007 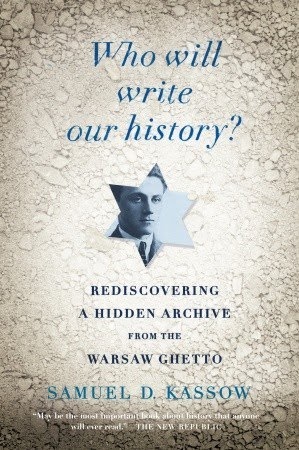 An Autodiactic Corner Selection for March

April 19, 1943 - The Uprising in the Warsaw Ghetto began when the Germans started to transport Ghetto residents to Treblinka for execution

Who Will Write Our History - Rediscovering a Hidden Archive from the Warsaw Ghetto by Samuel Kassow is one of the best done works of history I have ever had the great pleasure of reading.  It has won twelve awards and been translated into thirty languages.

I first began reading Yiddish literature in December of 2013 when Yale University Press gave me the full Yale Yiddish Collection, nine classic works.  I perceived a culture deeply into reading, with a profound respect for knowledge and a great sense of humour.  I began to read non-Fiction relating to Yiddish speakers.  I was deeply impacted to learn that upon being liberated from the concentration camps many asked for something to read.  In the last year or so I have been reading short stories by Yiddish Language writers, gradually learning more about the culture.  I have sought out the best works on the Holocaust which I see, among ,many things, as a direct attempt to destroy the reading life.

Kassow brilliantly focuses on the efforts of a group of Jewish intellectuals confined to the Warsaw Ghetto to complete a comprehensive account of Jewish history in Eastern Europe and detail all aspects of life in the Ghetto.  Their intention, which they largely completed, was to place all these reports in
metal containers and bury them.  The hope was that post war someone would find them.  They were discovered a few years after the war, The very real fear was that Jewish history and the Yiddish Language would be wiped from the face of the earth.

Kassow presents very well done bios of each of the numerous archivists, sadly most did not survive the war.  We learn a great deal about life in the Ghetto.  I came to understand how much preserving their history and culture meant to those involved in the archive project.

There is very much more I should say about this book but I will simply say if you have any interest in Jewish history, the Holocaust, WWII, Polish attitudes ( a very at best mixed picture) and the way the Ghetto ran then read this book.  Really I think any one who loves history will be glad they read this great book.

Samuel D. Kassow is the Charles Northam Professor of History at Trinity College. He is author of Students, Professors, and the State in Tsarist Russia, 1884–1917 and editor (with Edith W. Clowes and James L. West) of Between Tsar and People: The Search for a Public Identity in Tsarist Russia. He has lectured on Russian and Jewish history in many countries, including Israel, Russia, and Poland.

I have recently been reading W. G. Adler, author of the Shoah trilogy, and was so interested to learn of his massive study of/report on Theresienstadt during the war years. He was there with his wife and her family (none of whom survived) and then moved into a labour camp, where he worked to manufacture the sheet metal used in military planes. There are so many stories from these years which we have yet to discover. I admire all the reading you've done on the subject so far and this one sounds essential. I'm sure you have plenty of others on your list too!