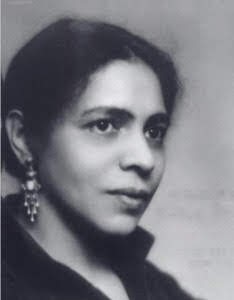 Considered a leading literary member of the Harlem Renaissance Movement

Larsen two novels both deal with a light skinned African American woman attempting to "pass" as white.  Her work treats issues of class, women's social roles in Chicago in the 1920s.  Her characters are upper class, affluent and educated.  Chicago in the 1920s had not yet felt great waves of people moving up from the south.  African American high society was a small world, the acceptable term was "Negro", social fraternities and sororities meant a lot, and the female standard of beauty was in favor of lighter skinned women.  Larsen in her work illuminated the psyche damage this caused.

She published two short stories in 1926, both are brief and both have a twist enfing.  The prose is very elegant.

In "Wrong Man" a woman is at a society party with her husband.  They are very happy.  She never told him she had been married and divorced before meeting him.  She wants it kept a secret.  Then who should be at the party but her ex-husband.  She approaches him and begs him not to say anything.  We learn at the end she had mixed things up, he was not her ex husband.  Cute Twist and for sure worth three or four minutes.

“Freedom” is a sharper story.  A man left his mistress to lead an expedition as an explorer.  He returned famous.  He finds his mistress died giving birth to his child.  Seeking freedom from gullt, he steps out of a ten story window.

A very informative article from The New York Times

I hope to read her two novels one day.