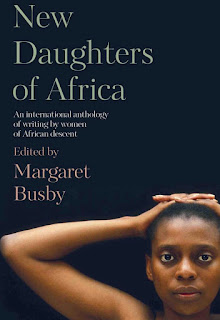 Among the insidious lingering aspects of colonialism are the scars left in the descendents of people once ruled by those who denigrated the normal skin tone, hair texture and traditional modes of dress of their ancestors.  Here in the Phillippines there are frequent TV commercials aimed at young women advertising products claiming  to “whiten your skin”.  All of The female media personalities and women in TV commercials have skin tones significantly lighter than typical.

“Sunita” by Chibundu Onuzo in just a few pages shows us a young woman struggling to overcome this colonizing of the mind.  In the process we learn about women of color from Africa are viewed in posh London.  Her family is from Nigeria and rich.  They sent her to London in the care of an aunt.  She attented an almost all white girls schools.  She bought a weave for her hair.  She  tried out an Afro.

As she approaches graduation she is assigned a mentor, another woman of color, to prepare her for job interviews.  Her mentor works for a company that helps businesses fill their diversity  quotas.  Dolapo wants to get a job in investment banking,

“Dọlapọ loved the afro now hidden under her weave, loved its untameable, uncombable sprawl, loved the extra inches it added to her height, loved the mushroom silhouette of her head in photos, loved hair that grew up instead of down, gravity-defying, extra-terrestrial hair. “That’s fine if you want to work in advertising or publishing, or media, or fashion, or maybe even engineering, but certainly not banking,” Daisy said. “My friends like it.” “White friends or black?” “Does it really matter?” “White or black?” “Mostly white.” “They think its funky, edgy and cool, don’t

they?” “What’s wrong with that.” “Never elegant, chic, glamorous; these are the adjectives we use for women in banking. These are the adjectives for success. As a black woman, let me be honest, when you walked into this room, what I saw was unprofessional, unkempt and unserious.” She had been paired with Daisy by Diversity Unlimited, a recruitment firm that helped companies fill up their ethnic minority quota. Daisy had worked for seven years in an investment bank. Daisy carried a red leather bag with slim, curved handles, discreet, silver, letters spelling out PRADA under the zip. Daisy wore structured dresses, thin black heels, milky pearls, minimal lipstick.”

We see Dolopo is at first torn.  She wants the job that would plesse her parents and insure her future but she wants to be herself, to be proud of her heritage.

I loved these lines so much:

“Dọlapọ’s more modest purchase came in a black cardboard box, edged with gold curlicue. The hair lay lustrous on a bed of crepe, folded into itself like a small, sleek creature, a sable or a mink. Her aunt had gone with her to the salon, leafing through magazines as they wove Dọlapọ’s afro into lines and then stitched the human hair to hers, tight-running stitches that made her eyes water. She skyped her parents in Nigeria once she got home. “Ọpẹ o,” her mother sang, her face large and happy on the screen. “Thank God you’ve finally gotten rid of that bush. Darling, come and see your eldest daughter.” The tablet was passed to Dọlapọ’s father.”

Of course she story takes a turn to a more independent Dolapo.

This is a wonderful story 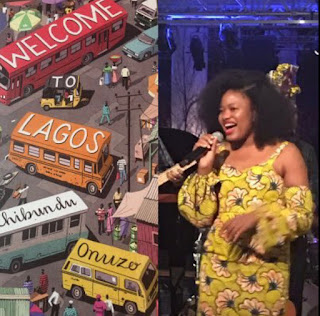 Born in Nigeria, she moved to England when she was 14. She began writing her first novel, The Spider King’s Daughter (2012), at the age of 17 and it was published by Faber and Faber when she was 21. The novel won a Betty Trask Award and was shortlisted for the Dylan Thomas Prize and the Commonwealth Book Prize.

It was longlisted for the Desmond Elliott Prize and for the Etisalat Prize for Literature. In 2014 she was selected for the Hay Festival’s Africa39 list of 39 Sub-Saharan African writers under 40 with the potential to define future trends in African literature. In 2018 she was elected Fellow of the Royal Society of Literature in its 40 Under 40 initiative. Reviewing her second novel, Welcome to Lagos (2016), Helon Habila wrote in The Guardian: “. . . her ability to bring her characters to life, including the city of Lagos, perhaps the best-painted character of all, is impressive.”  - from New Daughters of Africa.

I liked this story so much I acquired yesterday her novel Welcome to Lagos.

Email ThisBlogThis!Share to TwitterShare to FacebookShare to Pinterest
Labels: Nigeria