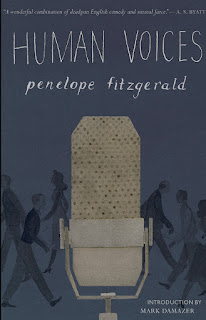 Prior to this month The Beginning of Spring was the third novel by Penelope Fitzgerald which I have had the great pleasure of reading.  Prior to today I have posted on her Offshore, then her acknowledged by all masterwork, Blue Flower based on the life of Novalis, one of her numerous short stories and Penelope Fitzgerald:A Life by Hermione Lee

Human Voices is set in the studios of the BBC in London in 1940.  No one knows if England will even survive.  The focus of the BBC is to keep the voice of England alive no matter what happens.  Everyone is on a war footing.  We very much see the famous stiff upper lip of the English. The city is under intense attack from German bombers.  BBC employees shelter at night in the subway stations.

The broadcast studio is run by two very different sort of men.  Each has their own style and are supported by female staff members.  Much is made of the various relationships. We learn a good bit about the mechanics of broadcast work.

PENELOPE FITZGERALD (1916–2000) was one of the most elegant and distinctive voices in British fiction. She won the National Book Critics

Circle Award in fiction for The Blue Flower, the Booker Prize for Offshore, and three of her novels—The Bookshop, The Gate of Angels, and The Beginning of Spring—were short-listed for the Booker Prize.

I hope to read her set in Florence in the 1950s novel Innocence soon.

Please share your experience with the work of Penelope Fitzgerald with us.