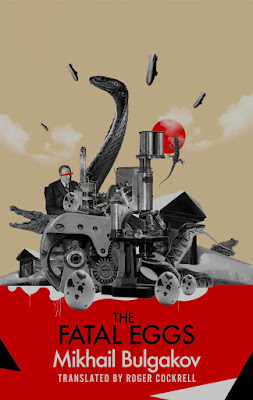 Last month I read The Master and Margarita by Mikhail Bulgakov.

(In the translation by Richard Pevear and Lariosa Volohonsky).  I was just mesmerized by this work.  I knew I wanted to read more of his fiction.  I decided to start my read through of his work  with his first novel White Guard.  Black Swan, my third of his novels is set largely  in The famous Moscow Art Theater.  The theater was founded in 1898 by The  highly influential Konstantia Stanislavski, whose acting philosophy greatly influenced American cinema and theater.

The Fatal Eggs is my fourth work by Bulgakov..  Imagine a disaster  started by accident in a lab and let loose to kill all the chickens in Russia.  Professor Persikov, a leading Soviet scientist has by accident created a ray that enhances and speeds up growth and reproduction in chickens. Eventually the chicken population is wiped out, one of the main food sources. This will lead to such great social unrest as the populace begins to experience extreme hunger that the army is called out.  Then the pandemic  begins to infect the eggs of snakes and reptiles which grow to huge sizes, a simple garden snake 12 meters, lizards as big and hungry as a bear.

Fatal Eggs is set in 1929, four years after it was written.  In his very good introduction Roger Cockrell says all of the references to things in Soviet society are accurate.  The book is a combination of science fiction with an astute satire of Soviet society.

Fatal Eggs is hilarious, the professor takes the fall for everything.

I will next read Bulgakov’s  A Dog’s Heart

I read The Master & Margarita by Mikhail Bulgakov in the early 1990s and loved it!! I need to reread it at some point.

I have yet to read The Fatal Eggs, so was excited to read your review of it. I've also been wanting to read The Heart of a Dog too.

I found your link through Carole's Chatter. Happy reading!

Captivated Reader. The two other, shorter, works are just wonderful. Fatal Eggs is perfect for our pandemic timers. Very glad you visited