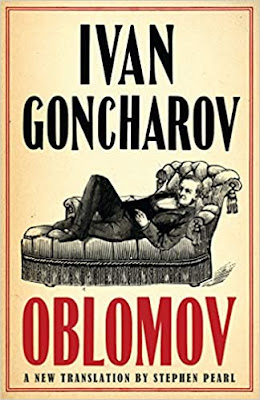 Ivan Goncharov (born Simbirsk, Russia 1812, died Saint Petersburg, 1881.  His best known work is his second novel, Oblomov (1859) about a minor Russian Nobel man who cannot find a reason to get out bed.  Tolstoy said Goncharov was his favorite novelist, Chekhov that his talent far exceeded his own.

Goncharov was born into a wealthy family.  After graduation from the Moscow State University he moved to Saint Petersburg where he worked as a government translator, censor and did private tutoring.  He also wrote poetry and his novels.  In March 2017 I read his novel, The Same Old Story.  I knew Oblomov was his most famous work but it was not then available as a Kindle, my preferred format.  I was happy to recently find Stephen Pearl, translator of The Same Old Story, has out a kindle edition of Oblomov.

Oblomov is a member of the upper middle class from a family of Russian landed minor aristocrats.  Oblomov has raised sloth to an art form.  His estate is managed by others, what little business he does transact is conducted from his bed.  As the book opens Oblomov receives a letter from his estate manager, things are not going well snd he needs to visit.  As he cannot get dressed without help, a trio of 1000 miles seems impossible.

As he sleeps he dreams of his completely pampered childhood. This is in contrast to his lifelong friend Stlotz raised to be disciplined and hard working.  He drops by to visit Oblomov who shows him the letter.  After urging him to take action Stoltz introduces him to Olga, they fall deeply in love and talk of marriage.  But Oblomov does nothing to put his affairs in order, it is obvious he is being cheated by two managers he saw as friends, and will take no steps to make their marriage happen.  Olga ends their relationship.  Olga goes to Paris and ends up marrying Stoltz.

In time Oblomov will marry his landlady who takes care of him the rest of his life.

There are beautiful descriptions of country life, Oblomov’s servants very much know they have an easy life just humoring him.

I am very glad I read this book.

Very nice of presenting the conte.It is very useful for new blogger .