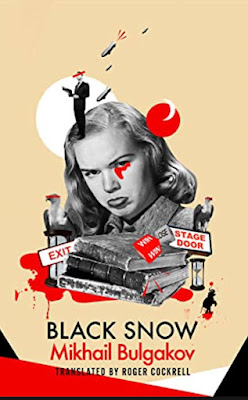 Last month I read The Master and Margarita by Mikhail Bulgahov

(In the translation by Richard Pevear and Lariosa Volohonsky).  I was just mesmerized by this work.  I knew I wanted to read more of his fiction.  I decided to start my read through of his work  with his first novel White Guard.  Black Swan, my third of his novels is set largely  in The famous Moscow Art Theater.  The theater was founded in 1898 by The  highly influential Konstantia Stanislavski, whose acting philosophy greatly influenced American cinema and theater.

Roger Cockrell in his very informative introduction indicates tbe extent which Black Snow draws from The Life experiences of Bulgahov.

The story opens with the central character, Maxudov,  living in a small Moscow apartment, making his living as a clerk, a job he hates.   Living with a cat he found on the streets, he has just finished his fitst novel.  He reads it to a group of literary types who almost all trash his work.  He plans suicide but gets distracted.  Through intervention by influential an friend he gets an opportunity at a theater which Cockrell and others say is modeled on the Moscow Art Theater.  They are going to put on his Play based on his families experiences  during 1918, a very turbulent and dangerous year in Kiev.  Basically his book is being turned into a play.  As The play is being rerearshed there all sorts of conflicts. The actors all have big personas.  People want changes in the play.  The management is potrayed in a hilarious fashion as a capricious dictatorship.  The Maxudov has to try to placate the managers, the actors to his growing frustration.

Buglahov is a Marvel at describing people vividly. In one great scene we see lots of people trying to get free tickets. Watching The business manager deal with this was hilarious.

Bulgahov never completed Black Snow.  He perhaps felt it would not get past censors or maybe he just got distracted.  In any case it eas just great fun to read

I will next read Fatal Eggs, then Morphine and after that The Dog’s Delimma.