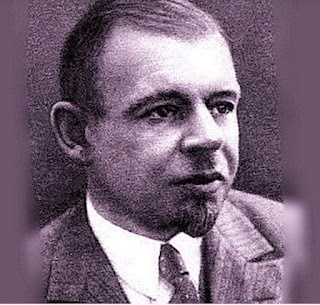 From The Fatal Eggs and other Soviet Satire - edited, introduced and translated by Mirra Ginsburg.  This collection has stories by 18 writers with very good introductions.  Most all are new to me writers. 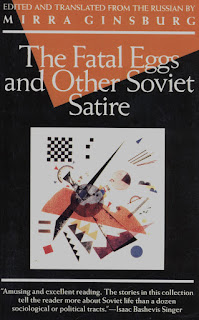 Panteleymon Romanov is best remembered for his Short Stories satarizing Life in The Soviet Union in the 1920s.  Mirra Ginsburg said censorship was not yet rigid and making fun of low level bureaucrats was acceptable.  The reactions  of the peasants to new regulations was also an acceptable topic.  The peasant class was not highly regarded by intellectuals who supported the Revolution.  Romanov was a devoted communist.  Ginsburg says he is now hardly read at all in Russia.

“About Cows” is very funny.  It starts out at a meeting where Soviet officials are telling a group of peasants they must get a stamp for their cows.  Somehow this is construed as meaning all pre-Soviet marriages are invalid as there are no stamps of ownership on the wives.  They are shocked to learn a wife can divorce her husband because he beats her.

““Well, let’s say, if you thrash her.” “How’s that? You mean a man can’t give his own wife a beating any more?” “No, you haven’t even got the right to swear at her.” “My own wife?” cried several voices. “God-given?” cried Prokhor Stepanych, who served in church in place of a deacon. “Nuts to your God,” the soldier, Andryushka, said irritably. He had come to get some information from the member of the Soviet. “You mean, if I want to divorce my woman, I can give the reason that I beat her?” he asked.”

Somehow a big question is who owns the family cow in the case of a divorce.

“Inventory”, set in a small village, is about the chaos that occurs when Soviet officials show up to inventory all children in the village under seven.  The villagers have advance warning of this so they fear the children will be taken and they hide them.  Try as they might the inspectors cannot find one child under seven.

“A Gift of God” is set in a railroad car. Three older women are returning to the market with sacks of flour. One has a lot, one s medium amount and one barely any.  The two with less insist under Soviet rule they all must have equal amounts.  When the one who has the most falls from the train and is brutally killed, an argument ensues about who should get her flour.  According to regulations they should turn her flour in.  But they know the officials would just keep it.

There are two other equally funny short stories in the collection.