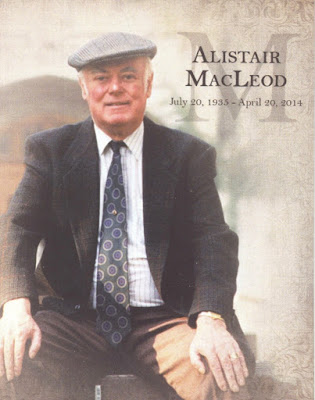 Join in with Buried in Print for A read along through The Short Stories of Alistair MacLeod.

Schedule for the Alistair MacLeod Read along

For almost four years i read along with Buried in Print through The Short Stories of Mavis Gallant. I was able to read and post on about half of her two hundred or so stories.  It was a great Reading Life experience which also gave me a sense of accomplishment.  Plus it was a lot of fun to folllow along with Buried in Print. Now we begin a new read along on a writer new to me, Alistair MacLeod. This Will be my second post on his work.

today’s story focuses on the oldest son in an impoverished Family.  In this story the Family moved from the coal fields of West Virginia to Indiana.  At that time, and largely still true, the appalacian areas of Kentucy and West Virginia were the poorest least educated areas of the United States.  (They voted 95 percent for trump.) The father works in a factory, supporting his large Family.

The world of this story has much surface and deeper images of a deeply ugly world. Rats are seen as saviours warning of a coal mine collapse.

Men are nameless, heavy, prone to outbursts of violence.

The lead character the oldest son, maybe 17.  He plays high School football and reads Conrad and Fitzgerald.  The parents are barely literate but revere schooling for their son. One day on the way home ftom School he stops in at a combination Pool hall and bar.  There are three bloated middled aged Go Go girls Dancing on the bar.

The Boy begins to shoot Pool.  It costs a Quarter  to Play, you claim your turn by putting down a Quarter.  The loser pays the Winner a dollar.  The balls weave a symbolic pattern.

“There were three quarters on the wood indicating that three challengers still remained. And he looked then at the soft, velvet green of the table itself, that held him, he thought, like a lotus land, and finally to the blackness of the eight-ball and the whiteness of the cue, good and evil he thought, paradoxically flowering here on the greenness of this plain. He was in his first real game, and it had somehow become a series of games, a marathon that had begun at eight when he had paused, books in hand at the doorway, and it had gone on and on, the night’s hours fleeing with the swiftness and unreality of a dream.”

Signs in The bar say no gambling, no minors, no throwing cigsrettes in the toilet.  You can almost take in the horrible smell of the place. He wins $31.00.

I do not want to reveal more of the story other than to say the close is very moving and the mother very strong.

I'm so glad that you appreciate the skill in these stories, because I do understand (especially given some of the heavy reading you have on your shelf) that the more sombre stories can weigh on your soul. But I do THINK the next story is not quiet so heavy.

The passages you've noted here struck me too --the way the pool hall comes alive, the strong presence of the parents, and I'm very fond of the ending, which seems to be heading in a predictable and proper way but, then, slips into something believable and more complex.