Everything is Illuminated by Johnathan Safran Foer - A Novel - 2002 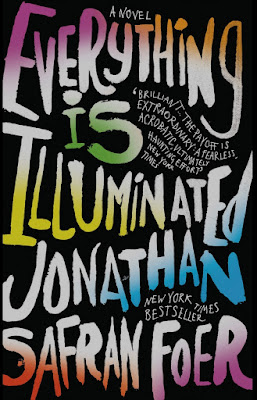 Everything is Illuminated by Jonathan Safran Foer - A Novel - 2002

Everything is Illuminated tells two stories.  One is author’s trip to The Ukraine to search for a woman who saved his grandfather from The Nazis.  The other aspect is a fictionalized historical account of Trachimbrod, a Jewish shtetl in The Ukraine.  During August and September 1942 the Germans, with the willing help of the Ukrainian authorities, killed almost all three thousand residents.

Foer, as a character in The narrative, travels from Americs to

the Ukraine to look for Augustine, the woman who saved his grandfather. He has a number of photographs of them together. Arriving with Maps of the area where Trachimbrod was, it no longer exists and some cigsrettes for gifts and bribes.  Foer has hired a Ukrainian native, Alexander to help him look for Augustine.  Alexander loves American pop culture and studied English at university. His pop culture knowledge is dated.  His “blind” grandfather goes along as the driver.  Additionally his dog, named “Sammy Davis, Jr. Jr” is an important part of the group.

To me, the book was written way before Borat became famous, Alexander sounds like a character of the movie.  I admit this might have caused me to not take the book all that seriously.  This is no doubt just my reaction.

The details of the history, going back to the 18th century, of

Trachimbrod, is rendered through stock characters.  There are terrible scenes from The Holocaust.  Foer meets a woman of the right age, at least mid seventies, who might be Augustine.

I am glad I read this book but I would endorse it only for those with a strong interest in the period and the history of Jewish people in the Ukraine.

Everything is Illuminated won numerous awards

“Jonathan Safran Foer is the author of the bestseller Everything Is Illuminated, named Book of the Year by the Los Angeles Times and the winner of numerous awards, including the Guardian First Book Prize, the National Jewish Book Award, and the New York Public Library Young Lions Prize. Foer was one of Rolling Stone's "People of the Year" and Esquire's "Best and Brightest." Foreign rights to his new novel have already been sold in ten countries. The film of Everything Is Illuminated, directed by Liev Schreiber and starring Elijah Wood, will be released in August 2005. Extremely Loud and Incredibly Close has been optioned for film by Scott Rudin Productions in conjunction with Warner Brothers and Paramount Pictures. Foer lives in Brooklyn, New York.” .from Amazon.COM