Curry: A Tale of Cooks and Conquerors by Lizzie Collingham - 2006 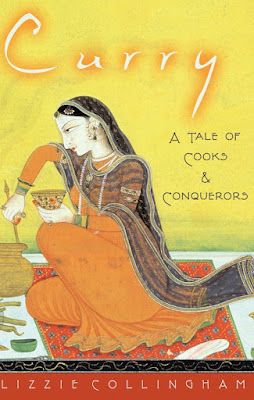 Curry: A Tale of Cooks  and Conquerors by Lizzie Collingham - 2006

“The idea of a curry is, in fact, a concept that the Europeans imposed on India’s food culture.” From Curry: A Tale of Cooks and Conquerors

Last month I read The Taste of Empire: How Britain’s Quest for Food Shaped the Modern World.  I found this one of the most interesting and informative works of narrative non-fiction I have read in quite a while.  I am increasingly getting interested in food history, especially how the spread of diverse foods and spices brought about by European exploration and colonization. On a personal note I am trying to learn how to add spices to my  food to fight negative consequences of past poor diet choices.  I knew that much of the spice that entered the diet of affluent Europeans after 1500 came from the Indian Subcontinent.

Curry: A Tale of Cooks and Conquerors is a fascinating look at how the rule of much of India by The British East India company reshaped both Indian and British cuisine.

Before the British arrived there was really no such thing as “Indian Cuisine”.  There was instead numerous very individualized forms of cooking based on local, heritage and religion.  What the world now calls “Indian Food” was created by Indian cooks working in the kitchens of the British.

“Although it lacked sophistication, Anglo-Indian cookery was the first truly pan-Indian cuisine. Mughlai cuisine never became an all-India phenomenon: the culinary styles of many Indian regions were not incorporated into the repertoire and its spread was limited. In contrast, the British adopted recipes, ingredients, techniques, and garnishes from all over the subcontinent and combined them in a coherent repertoire of dishes”.

Collingham meticulously explains how items now the main stays of Indian Cooking were introduced by the Portuguese and fostered by the British”.

“Although the Portuguese almost certainly introduced tomatoes and potatoes into India, these foods were not integrated into the Indian culinary world until the British showed their own cooks how to use them”.

The Portuguese also introduced the Chile pepper from South America into India at their colony in Goa.

The British came without women.  Many married Indian women and cherished their children.  The children grew up in a household managed by their Indian mother.

Collingham details how curry was created by combining spices.  She includes numerous recipes that are fun to read.  After ten to twenty years many from the British Raj returned home, bringing not just their wife and children but their Indian cooks and servants.  They continued to eat as much as possible in the fashion they knew.  Indian cooks began to start restaurants.

“Indeed, one of the distinguishing characteristics of Anglo-Indian cookery was its tendency to apply appealing aspects of particular regional dishes to all sorts of curry. In this way, mangoes, which were sometimes added to fish curries in parts of the southern coastal”.

From the British in India bringing home curry, it began to spread throughout their empire.  The curries of Malaysia and the Caribbean were derived from British rule of these regions.  Curry style varies based on local custom and availability of food.  West Indian curry was begun by persons working British owned plantations.  From here it spread through the Caribbean area.

Collingham goes into a lot of very interesting history.  There are chapters on several regions.  I learned how households of the British Raj were run.  The affluent might have 25 or more servants. At banquets guest would bring their own servant to stand behind them at meals.  Most Indians were vegetarians but those in places dominated by Europeans became  meat eaters,  many Muslims developed a fondness for pork.

Not everyone will readily accept Collingham’s thesis.  I found it quite convincingly relayed.  Last week we had Philippines style curried chicken.  The culinary history of the Philippines is very complex, derived from Malaysian, Indian, Chinese as well as Spanish sources and since World War Two, American influences.  Under it all we can see the British Raj.

I loved this book. I can see “food patriots” from Asia being offended by the central theme.

Lizzie Collingham is an associate fellow at the University of Warwick. The author of three books, including The Taste of War and Curry, Collingham lives in Cambridge, United Kingdom.