The People Immortal by Vasily Grossman - first published 1942- translated from Russian by Robert and Elizabeth Chandler - 2022 - to be published by The New York Review of Books September 22, 2022 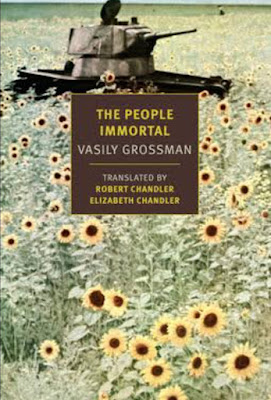 The People Immortal by Vasily Grossman - first published 1942- translated from Russian by Robert and Elizabeth Chandler - 2022 - to be published by The New York Review of Books September 22, 2022 - 252 pages

The People Immortal is set during the catastrophic for Russia first few months of the German invasion of the country.  It centers on a Russian army battalion whose mission is to, at any cost, slow the advancing Germans.  Through the eyes of Russians ranging from privates who want only to go home to Generals with deep love for the motherland Grossman brings the Russian experience vividly to life.  Germans are portrayed as brutal killers without a shred of humanity.  Nazis are Germans who have never heard of Goethe or Beethoven but worship Hitler.

For me the best part of this marvelous work were the many conversations.

Julia Volohova has contributed an informative introduction and afterword.