The Sailor Who Fell from Grace with the Sea by Yukio Mishima (translated by John Nathan-1965) is a central novel in the post World War II Japanese canon.


The plot of the novel is simple and easily admits of restatement and almost parody. A wealthy young beautiful widow with no man in her life for five years picks up a sailor and brings him home. At first her horrible brat of a 13 year old son likes the sailor then he comes to hate him. The son does some despicable things. The widow’s high fashion friends do not approve and she fears they may be snickering at her behind her back. The widow tries to turn the unpolished but not unthinking sailor into a slick clone of her idea of an English gentleman, even sending him to English lessons. Things do not work out well  in the end.

The characters in the novel at first seem like pure stereotypes. Fusako, who inherited a high fashion gift and clothing store that services the ultra rich:

Among the clientele were wealthy foreigners..a large number of dandies and movie people from Tokyo, and even some buyers from the small retail shops on the Ginza who came down to forage: Rex enjoyed a reputation for uncanny discernment of fine quality, particularly in imported men's wear accessories.

One day a ship arrives carrying a lot of imported goods. Fusako is invited to the ship to take her pick of the items for her shop. She takes her son along with her. The second mate of the ship tours them around and somehow the widow and the sailor ended up spending the night together in her very beautiful house in a high tone neighborhood. (We can already hear the neighbor's maids telling their employers what they saw come out of Fusako's house in the morning.)

At this point I took a look at what seems to be happening in the novel. It seems at first just a clichéd plot line-lonely rich widow with monster brat of a son meets a sailor and trouble follows. Once I thought about the cultural tradition of which the novel is from, I came to see this as very shallow reading of the work. The three main characters in the book, the widow, the sailor and the son are not to be seen as whole characters as they might in a novel from a purely European tradition but as ritualized figures in a Kabuki play. The original readers of this work would, I think, see the characters as meant to be ritually styled stereo types and the predictability of the plot is meant to be reflective of the inevitability of events.

If we accept this, the widow represents a consumer mad Japan that has forgotten its roots and now worships tokens of wealth and beauty with no understanding of what they mean. We see her wear a kimono only to show it off in the bedroom for the sailor. She is a mockery of the values an older world held sacred with regards to proper behavior of women. She represents the decadence of post war Japan. She is portrayed as an intelligent educated business woman without any form of self awareness.

The sailor is a bit more complicated and cast in a bit of a better light.

Whereas most men choose to become sailors because they like the sea, Ryuji had been guided by an antipathy to the land...He found himself in the strange predicament all sailors share: essentially he belongs neither to the land or the sea. There must be a special destiny in store for me; a glittering, special order kind no ordinary man would be permitted.

Ryuji the sailor, among other possible interperations, represents a Japan at sea with itself unrooted, belonging neither in its own past or in the west. The sailor tries to live by old stoic values. He falls prey to a love of comfort and easy sex and allows himself to be dressed up in English tweed suits and sent to English lessons.

The widow begins teach him about the merchandising business. He knows he is losing sight of his old values but he takes the offers life has seemingly made for him.

The widow has a 13 year old son. He is nasty and despicable. You will dislike him for sure. He has a group of same age friends who feel all adults are idiots. The son and his friends are to be seen as the future of Japan in a cultural in which the old values are destroyed.

I do not wish to give away the plot line of the novel. Remember the plot is supposed to be predictable. A predictable plot is essential for the novel to work. There are numerous usages of flower images in this work.

(I talked a bit about flower symbolism in the Japanese novel in my post on "The Crazy Iris" by Mesuji Ibuse.)

There are beautiful descriptions of nature, the sea as well as a highly erotized detailing of the body of the widow. (I should note that one chapter in this work will make cat lovers like me cringe.)

The Sailor Who Fell from Grace with the Sea is a great novel. I saw this once I stepped back from seeing the characters as figures in a novel purely in a Western tradition and instead saw them as beautifully rendered stock figures in a drama echoing back to long ago.

Yukio Misima, like too many Japanese writers, committed suicide. His life story is as strange as any plot line you could find. He got out of military service in WWII by faking the symptom of tuberculosis. He later became involved with a paramilitary group who wanted to restore the emperor to full rule of Japan and reinstate him as a god.  His life story is a fascinating.

I endorse this book with slight reservations. It is a bit hard not to see the characters as clichés. There is some hard to take cruelty to cats.

I am now starting to strive for an understanding of the post war Japanese novel as a cultural entity. When I first began to read works by Japanese authors I merely tried to understand each work on its own. I accept that in most cases only the best or most popular works are translated.

I will always be grateful to Dolce Bellezza and her Japanese Literature Challenge 3 for the enrichment of my Reading Life that has come to me from her challenge. 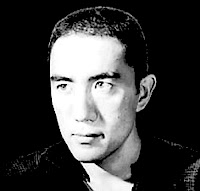 Mel, what can I say, I'm simply blown away by the number of Japanese book you get to read in such a short span of time. Amazing! It's like you plan to read every good Japanese work out there :)

I'm also interested in this book and I might pick it up one day (I've already seen it at the bookstore). Thanks!

The eye, the wave, the colors--what a compelling cover on this book!

You're "going to town" with the many reading challenges you've joined. うわー！

mel u: i enjoyed your thoughts on this book. I saw the movie many years ago when it was popular. It was made with British actors and did not have a Japanese theme. It was a chilling movie. I found your connecting the book to postwar Japan very interesting.

Thank you for your honest and thorough review. I could not handle cat cruelty :(

Mel, I love your interpretation of this novel as a Kabuki play.It explains so much. I found it disturbing (yes, I'm a cat lover) but also important. Wonderful, thoughtful review as always. Thank you.

I liked reading your interpretation, although I don't think this one is for me.

I think it's always difficult when you first start reading books from an entirely foreign culture, but then when you persist and begin to see connections, it's so rewarding.

Eva-I try to explain in my reviews reasons one might not want to read a book I post on-I hope to always have respect for the precious reading time of those in the reading life-taken in a straight forward way the characters of the book are shallow and the plot is totally cliched-that is the wrong way to see it, of course. There are wonderful descriptive phrases and lots of telling observations-the most off putting part of the book is the very clearly written cruelty to the cat. I would not recommend this book to my daughters even when they are in their 20s. It will make anyone who reads it think. There are some phrasing oddities that must be the product of translation-for example the use of the word "dandy"-a term not used in a straight forward way for 150 years.

Wow, I never imagined this story as what you have written - as the characters representing characters of a play and the son representing the future of Japan, etc. This has got me thinking. Amazing review!

love your interpretation of this book & am in agreement with his use of basic outline characters almost as puppets to put forward his viewpoint. He appears to deeply offended with the way his society was headed & its rejection of the traditional codes, but then he was from a long line of samurai if I remember, also the clash of identity between modernity & the traditions seem to be a massive theme is postwar Japanese literature, that & isolation. Great thought provoking review thanks