"An Attack of Hunger" ; by Maeve Brennan (1998, from Springs of Affection) 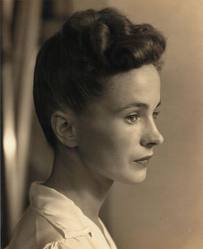 I first encountered  the work of Maeve Brennan during Irish Short Story Month I in 2011 when I listened to a wonderful podcast of of the story on the webpage of The New Yorker in which Roddy Doyle reads the story.   During Irish Short Story Month Year II in 2012 I posted on a truly wonderful cat story, set in her adopted home town of New York City, "Bianca, I Can See You".

Maeve Brennan's life should have been a perfect fairy tale of happiness.   There is a fey beauty in her face but I also see fear and a dark hunger.

I really love the stories by Brennan I have had the great pleasure of reading.  Her own story is heartbreaking.

"An Attack of Hunger" is pure unrelieved sadness.  It reminded me of Patrick Kavanagh's deeply beautiful poem "The Great Hunger".  One of the things I have seen in the Irish literary works I have read is a sense of a deeply pervasive sadness somehow caused by pervasive emotional restraint.  You can see this in stories from the masters like Joyce and John McGrath down to works published this year.  There is a hunger for love, a human connection that Irish culture seems to make it very hard to achieve.
Expressing of emotion is often seen as weakness and happens only in extreme moments.

I spoke last year about the idea that one of the pervasive themes of Irish literature is that of the weak or missing father.   In my 75 Q and A sessions I asked everyone about this issue.  The responses ranged from yes it is one of the dominant themes to no not at all.  Sometimes, maybe often in the Irish short story, a father can be physically present but emotionally absent.

"An Attack of Hunger" deals directly with issues related to the Irish father and the emotional constraints in the Irish family.  I will advise readers this is as a terribly moving sad story.   As you read it, I think your perceptions will expand.  One begins to wonder if behind the supposed weak or missing father, is a smothering mother who somehow uses her son as the total object of her affections.  In the process she ends up perpetuating a cycle of weakness.  She pushes her husband away and in so doing reduces his own sense of manhood and fatherhood.

There are only two on stage persons in this story, a married couple.  They have only one child.   He has left the home to be a priest.  The marriage has evolved into a cold near emotionally voided marriage.  The man gives the woman her household money every Friday.  She runs the house from a sense of duty.  All of her thoughts are on her son, John.  She recalls how the two of them, in her mind, were somehow united against the coldness of the father.  She still cannot believe he abandoned her to go in the priesthood.  She feels totally alone.  Everyday is the same.  Then there is a terrible fight in which she walks out.  I do not want to tell more of the plot as I hope you will read it.  At the close you may find yourself unsure what to think of the situation.  It is not as simple as we might have thought.

The ending is just so moving, so sad in its projection of years of pain and emptiness.

I read this story in The Granta Book of the Irish Short Story edited  by Anne Enright.

Please share your experience with Maeve Brennan with us.

Vapor Trails has done an excellent post on one of her stories.

This is wonderful, Mel. I love Maeve Brennan, and yes - her own story is heartbreaking.