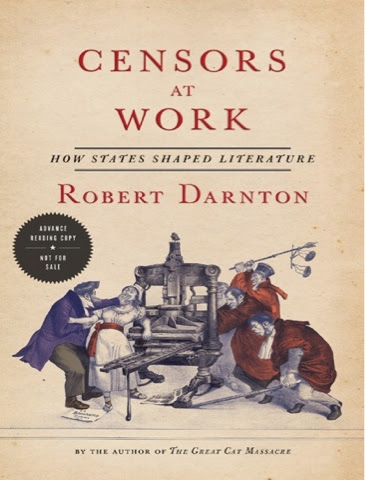 It has been thirty years since I read The Great Cat Massacre by Robert Darnton.  The book is a series of essays on the lives of ordinary people in France between around 1730 to 1760.  The title essay focused on an episode in a large print shop.  The workers hung all the many cats the owner  of the shop took care of out of outrage at the much better food the cats got than they did.  (I admit my emotional sympathy would have been for the cats!) Darnton is now regarded as one of the leading authorities on 18th century France.  He teaches at Harvard.
As Censors at Work Opens Darnton talks about how when the Internet first began it was wide open and very freeing of expression.  Now states want to find ways to block their citizens from writing orreading anything  they don't approve of on the net.  Just last week Turkey tried to keep their citizens off Twitter and China has built a great firewall to keep out forbidden content.  Here in the Philippines the government censors old Elvis movies for having women in too brief bathing suits.  Darnton wants to develop an understanding of how governments have censored books when they were the prime vehicles of communicating ideas and why they did this.  Darnton wanted to study actual past state censorship methods and goals, picking as his subjects eras with heavy archival documentation.
He focuses on three very different eras, 18th century Bourbon France, the British in India in mid 19th century India and Communist East Germany in the years the end of WWII to the unification of Germany.  I found his book a perfect example of a historical work of the highest standard that also can be read with great pleasure and edification by interested general readers.
Section One, "Bourbon France-Privilege and Repression", was very fascinating and deeply informative.
I thought that only books that attacked the King and the Nobles or had sexual content would be censored but the system went much beyond this.  Censors were in most cases near volunteer workers paid a very small fee.  Most did the work hoping to move up in the French government.  Nothing was supposed to be published without a stamp of approval. Censors actually could and did reject books if they thought the standard of writing was too low or if they feel the book has factual errors.  Censors were charged with only letting high quality books be published, in order to protect French culture from being "dumbed down".     If you wrote a book on cattle farming in Ancient Rome and the censor did not feel you had your facts right or that your book was poorly written, it might be blocked from publication.  Politically, no book attacking  any one rich could pass the censors.  There was a vast underground market for books and a whisper from a clandestine book merchant that a work was forbidden by the censors to a browser in their shop often induced a sale.  Darnton does a very good job of explaining how censors did their jobs.  There is a hilarious story about a poor censor who does not read a book and lets it pass at the bequest of the author's pretty wife and what happens when this slamming the Bourbon rule book makes it into print.  I found this a fascinating read which expanded my understanding of the life of authors, readers, and censors in the era.
Section Two, "British India - Liberalism and Imperialism" focuses on middle 19th century India, during the era of the British Raj.  Censorship was a much more complicated task here than in Bourbon France.  Books and pamphlets could be in dozens of languages.  Some British officers in India did become very expert in Indian literature and culture.  These men normally had no interest in working as low paid censors doing hack work.  The British had to turn to Indiand to work as censors, reporting back to Indian supervisors about books the English would not like.  India was, and still is, a very
multi- cultural society, no one could speak or read all the languages.  Much of the fascination of this section is seeing how the British used Indian censors to achieve their objectives while the Indians in turn managed their rulers.  Indians who worked for the Raj were caught in the bind of being comfortably paid servants of an oppressive colonial master.  Some of the British in India were men of deep culture and intellect who realized Indian literature had much older roots than theirs, some British saw the Indians as one step above monkeys, existing only to enrich the empire and themselves.
I found my understanding of Indian Literature, one of my core interests, greatly enriched by this section.
I skipped the last section devoted to Communist East Germany, kind of out of my main interest zone.
Censors at Work is first rate history.  Anyone interested in the literature of the eras covered would greatly profit, unless they are all ready an expert, from this book.  The standard of prose is high.

Robert Darnton was educated at Harvard University (A.B., 1960) and Oxford University (B.Phil., 1962; D. Phil., 1964), where he was a Rhodes scholar. After a brief stint as a reporter for The New York Times, he became a junior fellow in the Society of Fellows at Harvard. He taught at Princeton from 1968 until 2007, when he became Carl H. Pforzheimer University Professor and Director of the University Library at Harvard. He has been a visiting professor or fellow at many universities and institutes for advanced study, and his outside activities include service as a trustee of the New York Public Library and the Oxford University Press (USA) and terms as president of the American Historical Association and the International Society of Eighteenth-Century Studies. Among his honors are a MacArthur Prize Fellowship, a National Book Critics Circle Award, election to the French Legion of Honor, the National Humanities Medal conferred by President Obama in February 2012, and the Del Duca World Prize in the Humanities awarded by the Institut de France in 2013. He has written and edited many books, including The Business of Enlightenment: A Publishing History of the Encyclopédie (1979, an early attempt to develop the history of books as a field of study), The Great Cat Massacre and Other Episodes in French Cultural History (1984, probably his most popular work, which has been translated into 18 languages), Berlin Journal, 1989-1990, (1991, an account of the fall of the Berlin Wall and the collapse of East Germany), and The Forbidden Best-Sellers of Prerevolutionary France (1995, a study of the underground book trade). His latest books are The Case for Books (2009), The Devil in the Holy Water, or The Art of Slander in France from Louis XIV to Napoleon (2009), and Poetry and the Police: Communication Networks in Eighteenth-Century Paris (2010).

I was provided a free review copy of this book.