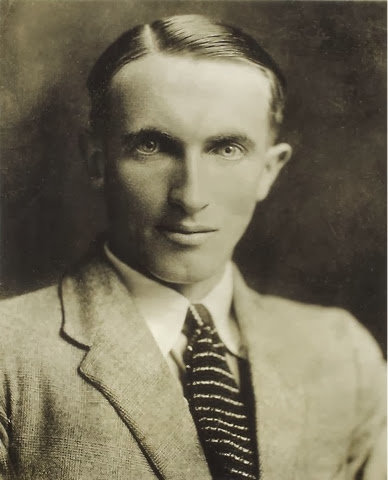 Liam O'Flaherty (1897 to 1984) was born in Inishmore on one of the Aran Islands, off the west coast of Ireland.  His cousin was the famous Hollywood movie director  John Ford.    Like Frank O'Conner and Sean O'Faolain he was involved in the Irish War for independence against the British (largely a guerrilla war)1919 to 1921.    It was a bloody war of brother against brother in many cases.   It ended in Southern Ireland becoming an independent country with largely Protestant Northern Ireland staying under British rule.
O'Flaherty worked for a time as a teacher until he became successful with novels like The Informer (which his cousin made into a movie) .     O'Flaherty moved the USA around 1923 to live in Hollywood so he could work with his cousin, among other reasons.   He was for a time a communist but returned to his Roman Catholic roots in latter years.   He had an affair with Elizabeth Bowen.    He was deeply into the reading life with a passion for French and Russian literature.    Much of his adult life was lived in the USA, his  writings nearly all deal with Ireland.
During ISSM2 in 2012,  I posted on one of his most famous short stories, "Going Into Exile".  I admit I have been jealous of him ever since I heard he had an affair with Elizabeth Bowen!
The Catholic Priest plays a large role in the Irish short story, often depicted in a quite unfavorable fashion as a man taking out his own misery on his flock, fighting demons and sexual urges.  They are often portrayed as being cruel, petty tyrants to the young people who go to Catholic schools, using guilt to torment them.   The problem of misbehavior among Irish priests, in terms largely of sexual abuse of young boys, is an ongoing travesty which has been addressed by the Vatican.  I have posted on several short stories about Irish priests, the most recently written story was "A Priest in the Family" by Colum Tobin which deals with just such a priest.
"The Inquistion" is set in a Catholic school.  The priest teaching in these schools were often, I know they all were not, vicious near sadists taking out deeply repressed homo-erotic urges on the boys through harsh  beatings, often on the bare bottom.  As the story opens, the priest is interrogating one of the boys about a reported incident in which several boys were observed buying cigarettes in the village.  The priest is shocked as the boy was the one pupil he felt was totally sanctimonious in his habits.  He begins to demand the boy tell him who else bought cigarettes, smoking by the young being scene as a terrible sin.  He uses guilt to try to get the boy to inform.  As the story proceeds, the boy begins to have contempt for the priest and see through his teachings.
This really is a beautiful story.  It is very anti-clerical.  There are some say deep connections between the power of the priest and the weakness of the Irish father.  Often it seems the brutality of the priest gives license to parental cruelty from a father who feels the church has taken away his authority, admist a culture of repression.  From this the father seeks escape in pubs and drink.
You can read this story here
http://fullreads.com/authors/liam-oflaherty/
Mel u

A great post! I've always been a fan of LO'F - have you read any of the short stories such as 'The Tent', 'The Conger Eel', 'Trapped', 'The Blackbird's Mate','Spring Sowing'...
Poetry in prose. Short intense bursts of lyricism.