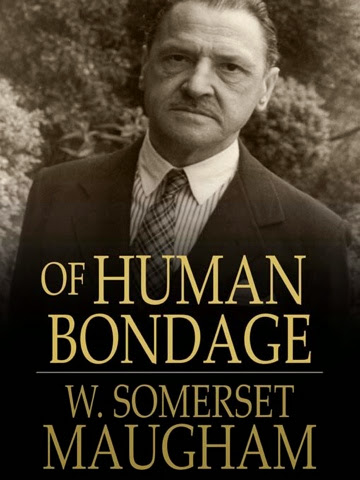 My Posts on Maugham
How can you not like a novel that uses "Meredithian" as an adjective?
Over the last three years I have read and greatly enjoyed two short stories by W. Somerset Maugham (1874 to 1965-there is some background information on him in my posts).  I knew that Of Human Bondage was his undisputed master work.   The main reason I have previously not read it is basically the length.  I am so glad I overcame my hesitation.  The Manchester Guardian recently listed it as the 44th best novel of all time and that was what pushed me to go ahead and read it.
Of Human Bondage is a coming of age story that covers about 20 years in the life of Philip Carey.  Based on current events in the story it takes place from about 1880 to 1905.  He was made an orphan by the early death of his mother and went to live with an uncle, an Anglican cleric. Philip has a club foot and this was an important factor in his life.  Philip was expected to become a cleric himself and was educated with that in mind. I totally loved the scenes in the book where Phillip first comes to read in his uncle's library of 4000 or so books.  Anybody that came to the reading life on their own at a young age will identify strongly with Philip. Phillip does not thrive at University and his uncle pressures him into a five year apprenticeship at an accounting firm.  Everywhere Philip goes Maugham does a marvelous job of making the experience come to life with marvelous minor characters and great descriptions.  Maugham lets us feel we are walking the streets of London and later Paris.
Against the advise of his Uncle, who controls his money until he is twenty one, he quits the accounting work, he was doing poorly any way, and moves to Paris to follow his dream of becoming a painter.  Much of the novel deals with his life as an art student in Paris.  Now the central villain of the novel appears, Mildred, who will be the near ruination of Philip's life.
Compressing a lot, Philip comes to see he has no real talent as a painter and returns to England to study medicine.  His father was a doctor.  His uncle approves of this after reprimanding him for time wasted.   Maugham lets us see exactly how one became a doctor in London.  He also takes us through areas of terrible poverty.  Philip has to drop out of school for years, becomes homeless, all basically caused by his obsession with the incredibly nasty Mildred.  I don't want to tell too much but he does return to school and becomes certified as a doctor. While working in a hospital he becomes friends with a patient there and ends up almost a part of the man's extended family.   I will not say more of the plot.  You will come to hate Mildred and feel Philip is in need of a good thrashing!
The prose is elegant and simple in sentence structure.  There are lots of great literary references, this is for sure part of the reading life canon of books about people who lead reading centered lives, and artistic discussion.
(A scene in from the movie, in Philip's quarters, with Mildred) 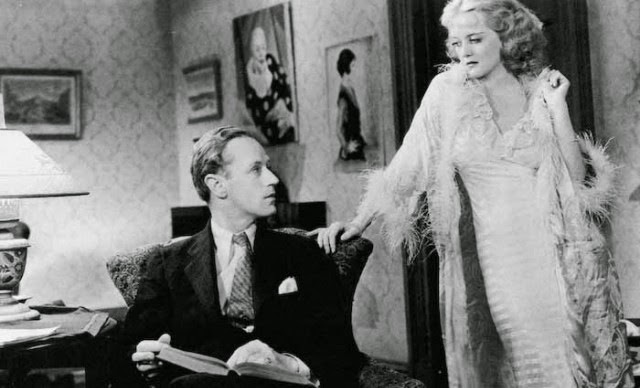 I strongly endorse the reading of this book.  I downloaded it for free from Manybooks.org.
Please share your experiences with Maugham with us
Did you like the happy ending?
What Maugham novel should I read next.
Mel u

I enjoyed the movie with Bette Davis and Leslie Howard, but I haven't been inclined to read the book. It's clear now that the movie only trifles with the novel's depth of plot and detail.

Nicely reviewed, Mel. I read this wonderful book several years ago, after I studied an abridged version in my school English textbook. I have not returned to Maugham since but your review will be a second inspiration for me to revisit his work.

Thanks for an excellent review of one of my favorite novels. I read this as a teenager and have reread it since. While it is a favorite I have been both fascinated and disappointed by the choices Philip makes as he grows and develops. He seems too often self-defeating in his actions. Your comment "You will come to hate Mildred and feel Philip is in need of a good thrashing!" pretty much sums up my feelings regarding his obsession with Mildred.
That Maugham can make the novel successful in spite of this is a testament to his powers as a great story-teller.
Among his other novels I admire The Razor's Edge the most.

David Loeff- thanks for your comment. I would love to see the movie one day.

Prashhant - for sure it is worth reading

James. I will read The Razor's Edge soon.