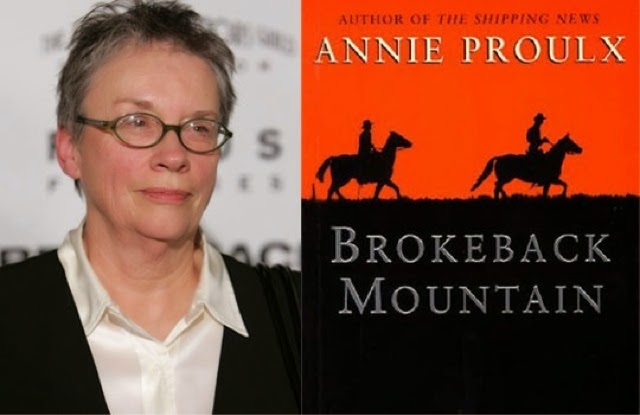 "Brokeback Mountain" by Annie Proulx was first published in The New Yorker October 13, 1997 and in an slightly expanded version in Close Range:  Wyoming Stories.  It was made into a movie in 2005.   Set in modern Wyoming  from 1963 to 1983 it is the story of two cowboys who fall in love.  Many more people will snigger at the expression "Brokeback Mountain" than will ever read the story.  It strikes at the very heart of the American myth of the macho cowboy.  There is only one explicitly sexual scene in the story and it is very powerful, perhaps because we are not expecting anything this vivid and we are shocked by what happens.  Rugged cowboys are not supposed to do this kind of thing in a society which worships masculinity and hates any sign of male homosexuality as an affront to Wyoming and the American way!  The two men have an encounter that is tender and erotic, it surprises both of them but they accept it without shame.  They go there own ways, over the course of twenty years each marries and has children and girlfriends,  They do manage to reunite on and off over the years and I think both think maybe they would have been better off with each other.  They live in a violently homophobic society where gay suspected men have been murdered.  I have left out a lot of this very rich story so as not to interfere with first time readers experiences.
Proulx brings twenty years very much to life for us.  This is a great story.  It gives us a strong feel for Wyoming life.
This is the third story by Proulx I have read.  I have access to two more and will read them soon.
This story can be found online.  I do not include a link as I am not sure if it is authorized or not.
Annie Proulx is the author of eight books, including the novel The Shipping News and the story collection . Her many honors include a Pulitzer Prize, a National Book Award, the Irish Times International Fiction Prize, and a PEN/Faulkner award. Her story “Brokeback Mountain,” which originally appeared in The New Yorker, was made into an Academy Award-winning film. Her most recent book is Fine Just the Way It Is. She lives in . - from publisher web page
Please share your experience with Proulx with us
Mel u

THis was such a good short story. I sure picked the right year to subscribe to the New Yorker. I remember reading it and feeling pretty blown away. Years later when the trailers for the movie started showing, I couldn't put my finger on *why* the story sounded so intimately familiar to me, since at that time, I'd never read one of Proulx's books.

As the Crowe Flies and Reads- it is a great story. The New Yorker Archives has made three of her short stories available for all to read, for a while.