Ferragus by Honore de Balzac (1833, A Novel, A Component of the HumanComedy)

Part One of The Historie de Treize Trilogy 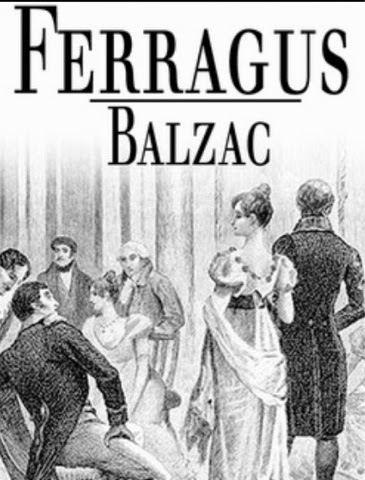 Ferragus gets of to a great start.  Auguste, a young army officer, is walking through a street in Paris with a terrible reputation, being the location of numerous brothels and to his great dismay he spots a young woman with whom he is infatuated walking in front of him.  She is married to a very wealthy older man and her reputation for virtue is impeccable.  To his incredible shock, he sees her go into one of the bordellos.  He remains a while thinking she must have entered in error but leaves bewildered when she does not come out.  He decides he will find out her secret.  This chapter was marvelous.  Dickens could do a great description of the evident depravity of this street also,the difference is Balzac can make the street seem horrible and fascinating at the same time.  Dickens hates the dark depraved side of London where Balzac loves and hates the derelict by ways of Paris.

In his efforts to unravel the woman's secret he meets Ferragus, a sinister man with all sorts of powerful connections, possssed of deep knowledge of the hidden corridors of power in Paris.  Auguste tells Ferragus what he saw.  Ferragus advises him trying to pursue this investigation may prove very dangerous.  You can tell Balzac really enjoyed writing about secret societies and criminal leagues with ties to high society.  I won't tell more of the plot but the surprise ending was a good one.

I will next read The Duchess of Langeais and then The Girl With the Golden Eyes.

Mel, I'm glad you enjoyed part one. Wishing you and your family a happy and healthy New Year! :)