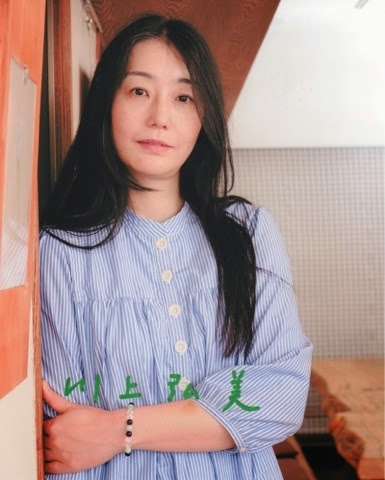 "Mogera Wogura", in The Parisian Review, Spring, 2005 (translated by Michael Emmerich)
"God Bless You, 2011" in Granta, March 10, 2012 (translated by Ted Goosen and Motoyuki Shibata)
Until yesterday I had never heard of Hiromi Kawkami, a multi-awarded Japanese writer.  I became aware of her through a recurring Facebook post by Billy O'Callaghan.  (I have posted on three of his wonderful short collections and he has kindly done a Q and A Session on The Reading Life which contains lots of great reading suggestions.). Having now read and been very intrigued by two of her stories I have added her to my read all I can list.
"Mogera Wogura" has a Hurakami Murkami Magic Realism meets Kafka feel but the execution is delightfully  orginal and for sure deeply mystified me.  Set in contemporary Tokyo, Mongera Woguras are fully intelligent and articulate underground dwelling entities (I am not sure it is accurate to call them animals) about a meter tall, covered with hair,they once were common place but now only one extended family seems left.  They pretty much live humans but underground, having spouses and in laws.  They have their own culture but the husband works in an office with humans.  In the strangest left very mysterious aspect of the story the husband collects a certain type of person, we don't really know what he is looking for, and somehow reduces them to very small size, takes them home where they return to full size.  The reasons behind this are left for us to ponder.
You can read this story here.
"God Bless You, 2011", like "Mogera Wagura", features a nonhuman person acting, speaking, and behaving very much like a human while still, in this story, remaining a very large bear.  This story is only three pages and has an interesting back story (which you can read at the link I will below provide.
The story is about a bear and a woman out for a walk that is the tentative first step in a possible relationship.  They are walking in the area of the 2011 Meltdown of a nuclear power plant after an earthquake. Both are concerned with tracking their amount of radiation exposure.  Goverment agents responsible for checking radiation levels are a bit jealous of the bear as bears can stand more radiation than humans.  The bear shows of his fishing skills when he dives in a river and gets a fish.  I will leave the rest of this really fascinating story untold.
You can read this story  here

Hiromi Kawakami  (1958–)  has on the one hand won accolades for her innovative style—notably in her novel Manazuru, which won the MEXT Award for the Arts in 2007 and has been translated into English, German, and French—while on the other producing a growing body of highly realistic, eminently readable stories about the lives and loves of women in contemporary Japan. She first began submitting stories to science-fiction magazines and taking on editorial work while majoring in biology at Ochanomizu University. Her literary coming of age arrived in 1994, when she won the Pascal Short Story Award for New Writers, an all-online competition, for Kamisama (God Bless You). In 1996, she received the Akutagawa Prize for her short story Hebi o fumu (Step on a Snake), which established her among the standard bearers of the Japanese literary world. In 2001 she won the Tanizaki Jun'ichiro Prize for her best-selling novel Sensei no kaban (The Teacher's Briefcase), which was adapted for television by the writer and director Teruhiko Kuze. After the earthquake and tsunami of March 2011, she created a commotion with God Bless You, 2011 (tr. 2012, in the anthology March Was Made of Yarn), a reworking of her earlier story relocated to radiation-contaminated Fukushima.