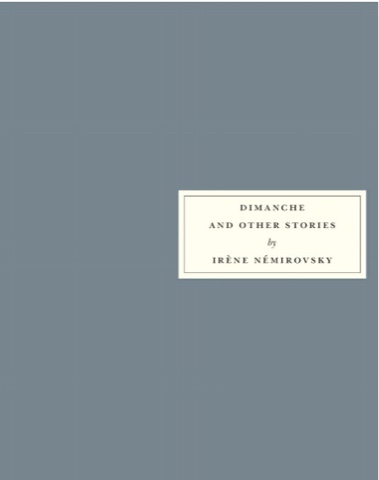 There are ten short stories by Iréne Nemirovsky pictured above.  Most of the stories are set in Paris just before or right after the start of World War Two.  "Those Happy Shores" is set in a bar, a place where an affluent man from the provinces in town on business might stop in looking for professional female company.  The story focuses on a woman who had been the mistress of an unmarried man for ten years.  She lived in a nice apartment he provided and from his allowance.  He always planned to include her in his will but once the cancer set in his mind set was elsewhere.  Everything ended up being left to his sister who threw her out.  Now she waits in the bar, hoping to find another long term lover but settling for a man for the evening.  We see her struggle not to think of herself as a prostitute, she is forty.  In the bar she meets a beautiful twenty year old girl, just starting in on the life.  It was fascinating to listen to them talk.

As the story winds down, tne bartender tells her she is no longer welcome in tne bar, the pYrons are tired of her asking for drinks and cigarettes.  As she walks the Paris night, the happy shores of the Seine seem to call her.

I love Nemirovsky's work, so I was fascinated to know there was a biography of her, by Olivier Philipponnat and Patrick Lienhardt. I bought it but found it very difficult to read - lots of information, but hard. Pity it wasn't as readable as her novels!

Kathleen. I am almost at the close of the biography. I was very moved to learn just two days before her arrest she was reading the journal of Katherine Mansfield, whose work she deeply admired.

Kathleen. These lines are from very near the close of the biography. It looks like the journal of Katherine Mansfield was the last book Iréne Nemirovsky ever read.

"The pine trees all around me. I am sitting on my blue cardigan in the middle of an ocean of leaves, wet and rotting from last night’s storm, as if on a raft, my legs tucked under me. In my bag I have Volume II of Anna Karenina, K. M.’ s Journal and an orange. My friends the bumblebees, delightful insects, seem pleased with themselves and their buzzing is deep and solemn. I like low, solemn tones in voices and in nature. The shrill “chirp, chirp” of the small birds in the trees gets on my nerves. In a moment or so I will try to find the hidden Lake."

Sadly she did not take any books when the French police came for her.