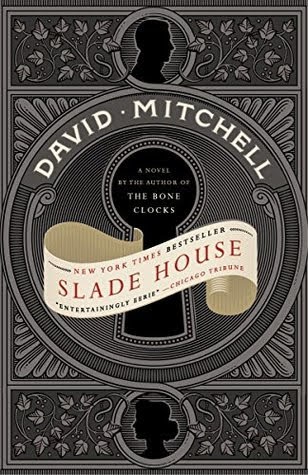 My Post on The Bone Clocks by David Mitchell

My first encounter with David Mitchell, in February of last year,  was with his marvelous novel Bone Clocks. I knew I wanted to read more by such a creative writer.  Luckily I recently found his Slade House, which has overlapping characters with Bone Clocks  and other of his novels but you can be read it with no knowledge of this book, on a flash sale as Kindle edition for $1.95.  I guess it can be considered in the tradition of haunted house horror stories.  It is really a fun and if you give in to it, a scary book.

Slade House appears only once every nine years.  It is inhabited by twins, a male and a female born in the 1880s.  In order to maintain their life sustaining energy, ever nine years they, often in different appearances, lure someone into the house and consume their soul.  Each of the six episodes in Slade House involves different victims from different walks of life each tricked into entering the house and becoming a victim.  As the authorities investigate the mysterious disappearances,  we learn more about the twins and the occult theories used by psychic experts, self proclaimed, to explain what is going on.  We get to know the twins more with each segment.

The ending is very powerful

To me Slade House was very creative, a delightful escapist read.

David Mitchell is the award-winning and bestselling author of The Thousand Autumns of Jacob de Zoet, Black Swan Green, Cloud Atlas, Number9Dream, Ghostwritten and The Bone Clocks. Twice shortlisted for the Man Booker Prize, Mitchell was named one of the 100 most influential people in the world by TIME magazine in 2007. With KA Yoshida, Mitchell co-translated from the Japanese the international bestselling memoir, The Reason I Jump. He lives in Ireland with his wife and two children...from Davidmitchellbooks.com

I have begun The Thousand Autumns of Jacob de Zoet, The opening chapter was incredible.

oooOOOoooo I've been waiting for you to get to Thousand Autumns. I have a feeling that it might be your new favourite of his books. But I know you loved The Bone Clocks a lot! Slade House is a delight, a horror. And it's so short that I can imagine rereading it for October sometime.

Buried in Print - so far i am loving The Thousand Autumns of Jacob de Zoet, The opening chapter is among The most dramatic I have ever read.