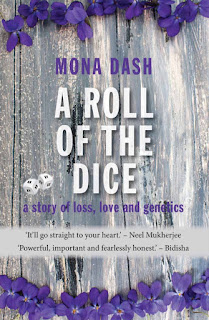 Mona Dash lost her first child, a boy,  to a very rare genetic disease passed from mothers to sons, SCID (severe combined immunodeficiency).  Spanning ten years we follow her through the horrowing efforts to find out why her healthy at first baby son is fading. Her descriptions of the last hours of her son will impact deeply any caring person. She is wounded when the hospital personnel told her the boy will be buried, not cremated as is customary for those of her faith, Hindus. She was told babies under one are buried.  Of course    Mona tries to understand what happened.  She had very carefully observed proper procedures, all her check ups had been positive.  Why was her baby taken?  As the memoir opens she learns the problem.

In India,where the memoir begins, the genetic disease is so uncommon, maybe one male baby out of 700,000, that physicians there are not able to initially recognize her first baby's condition in time to treat him.  She and her husband went from one doctor to another.  Finally they were referred to a doctor in Vellore who discovered she was a genetic bearer of a disease that has a fifty percent chance of taking the life of any male child in just a few years at most.  The doctor told her the best hope for her to have a son free of this disease was to move to London where there were physicians and facilities that could help her.  In order to have any hope of having a healthy son she would need expert specialized neo-natal care and very careful monitoring while pregnant.  Some doctors did advise her it might be best to abort the birth of any boys but she refused this as did her very supportive husband.

Making the decision to move to London was not easy.  She and her husband both had good jobs and family ties.  We go along as they relocate in London and are soon employed and settle into life in London.  When Mona once again becomes pregnant she is advised to go to Great Ormond Street Hospital where SCID (Severe Combined Immuno-deficiency) is recognised and understood.  It is determined the baby is a boy, meaning about a fifty percent change he will have SCID.  Mona is very much an internet connected person and she joins support groups for mothers with her issue.  I was moved to see she developed real and long lasting relationships with other mothers, from all over the world.

As the pregnancy proceeds we learn about treatment procedures in considerable detail. All of the hospital personnel and her doctors are very caring.  Her parents come from India to help.  Her new employer resents her time off from work.  We see how her religious and spiritual faith helps sustain her.  Just as she was, with everyday we worry more and are more concerned.  I admired her husband for his dedication.

Roll of the Dice- A Story of Love Loss and Genetics is more than just an edifying account of a difficult pregnancy.  It is a story of family love, marital love, about adjusting to a life in a new city.  We learn about medical practitioners in India and London. I found it very honest, I wanted so much for Mona to realize her dreams.

Included is an by INTRODUCTION BY PROFESSOR BOBBY GASPAR,M.D., from Great Ormand Street Hospital in London.  He helps us with medical details about SCID.

As I read this powerful memoir I could not help but think of the Russian  Czar Nicholas and his wife Alexandria trying to cope with the hemophilia of their son.  I think they would greatly admire Mona Dash.

I highly recommend her memoir.