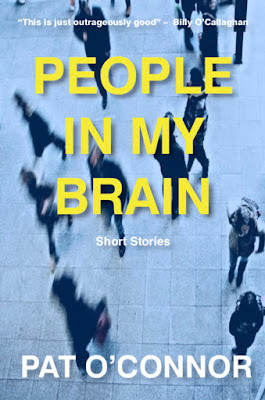 During the last 18 months, here in Metro Manila, I have been pretty much under lockdown the entire time.  The government has strict regulations and my wife and three adult daughters have imposed stricter ones.  We suffer no material deprivation, while many here do have real food anxieties, I have videos, a virtual and real library, six cats and a newly added Shin Tsu for company.  I am grateful for my privileged situation but sometimes I miss going to the mall, dining out and other things.  Compared to millions who live day to day struggling to survive, like the man in “Creeping”,I am so very fortunate.

I have been working my way through The stories in

People in My Brain,  creatively a very diverse exciting collection, for the last few months.

Today’s story, “Creeping”, centers on a quite old man, recently widowed.  He lives in a terrible urban slum, nearly dystopic.  Once his neighborhood was not to bad, it all went to hell when his wife Gracie died.  He stays in their house but afraid to Go out to get food because of the children.

“Evening has deepened. Darkness falls. Out in the street, roars and shrieks echo against the walls, the blare of loud cars and motorbikes is angry, ever-changing. I can’t know who might be in the garden. The windows are useless because of the bushes. I dread those windows. I’ve dreamed of sheets of wood, of corrugated iron, so that when they come they must at least come by the door. But corrugated iron is as impossible as anything else.”.

We can feel the old man’s fear.

In just a few pages O’Connor brings us into this horrible world.

His stories have been published in Southword, Revival, Crannóg, The Penny Dreadful, the Irish Independent, the Irish Times, anthologized by the Munster Literary Centre, and broadcast on RTE.

His radio play This Time it’s Different, was broadcast on 95fm as part of the Limerick City of Culture program in 2014.

In autumn 2014, he was one of eight International Writers in Residence in Tianjin, China.

His story Advice and Sandwiches was included in the Hennessy Anthology of New Irish Writing 2005-2015, published by New Island.