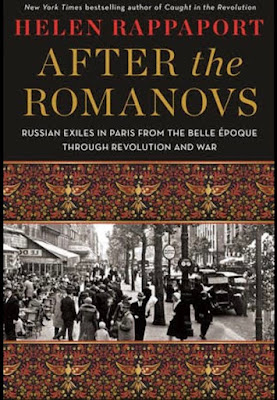 This will be my eighth year participating in a wonderful event, Paris in July.  The event hosts are Reader Buzz and Thyme for Tea.  Posts on any and all things Paris are welcome.  You can share your memories of a trip to Paris, your favorite French recipes or restaurants, art in the  Louvre, your favorite set in Paris Movies (mine are Ninotchka and Midnight in Paris).  Of course the French literary masters as well as contemporary writers are great subjects. 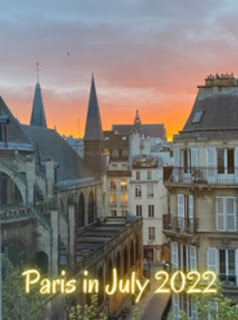 Last year I posted on six short stories by Russian Émigré writers who loved to Paris after the fall of the Tsars among others works.  Three of them are given illuminating coverage

in After the Romanovs.

Paris in July is an excellent way to meet bloggers outside the Book Blog world, to expand your knowledge of Parisian history and culture.

Like those depicted in  my first post for Paris in July, Yiddish Paris by Nicolas Underwood, Russians moved to Paris because they felt they no longer had a safe home, free from the threat of death.

The book opens in 1900 at the most elite restaurant in Paris.  Among the clientele are Russian Grand Dukes and their French Courtesan mistresses. (This courtesy title was borne by the sons and male-line grandsons of the Emperor of all the Russias, along with the style of His Imperial Highness. They were not sovereigns, but members and dynasts of the House of the reigning emperor. From Wikipedia) Grand Dukes often had no actual responsibilities, this combined with great wealth, arranged marriages and the eagerness of the French to cater to them drew them to Paris. Some bought mansions and gave huge tips, lavishing fortunes on a French mistress .  Then came the Russian Revolution and everything changed.

Some had the foresight to bring liquid wealth to Paris, some ended up as waiters or cab drivers.  Many of the Romanov women became employed as seamstress or models. Most Russian exiles never  stopped believing the Bolsheviks would be overturned and they could return.

Soon after the fall of the Tsar 1000s of ordinary Russians moved to Paris, struggling to fit in, speaking no French and looking for work.  2500 became cab drivers, a relatively desirable occupation. 1000s worked in Renault and Citroen factories.  Richer Russians did try to help those in poverty.  As the French economy went into decline, some resentment was felt toward Russians taking jobs.  Younger Russians born in France had little nostalgia for Czarist days.  Rappaprt estimates there were about 75,000 Émigrés at the peak.

After the Romanovs is an excellent work of narrative non-fiction, very well documented and written.

Details on Rappaports background and other books can be found here

Sounds fascinating. I wanted to read something by Rappaport for some time. This might be it.

What an interesting book! The details you've written here make me think of an old movie (2005), which presents a similar situation of a Russian family in China; yes, many of these aristocrats escaped to their neighboring country, China. The film is called "The White Countess" with some famous names: Directed by James Ivory, screenplay by Kazuo Ishiguro, star Ralph Fiennes, Natasha Richardson, Vanessa Redgrave. I've just posted my first Paris in July post and waiting for the Week 2 list to come out for me to link. :)