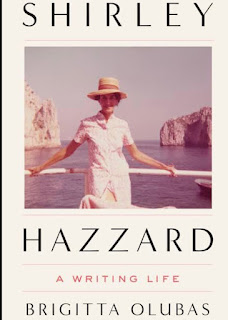 The Transit of Venus - 1989 (considered her greatest work)

Brigitta Olubas, Hazzard’s authorized biographer, draws on Hazzard’s fiction—which itself drew on her lived experiences—as well as her extensive archive of letters, diaries, and notebooks, and on memories of her surviving friends and family, to create this vibrant portrait of an exceptional woman. Born in Australia she was truly a citizen of a world now largely gone.

Beginning in her younger days in Australia then moving to Hong Kong with her parents where she began her first of numerous romances, to her middle age and marriage to the Flaubert scholar Francis Steegmuller to her old age and descent into dementia in her 80s. She was friends with numerous famous literary figures.  The Isle of Capri became the home of Hazzard and her husband.

Brigitta Oulbas goes into great detail on how Hazzard’s life experiences  influenced her writings.  She worked for The United Nations in New York City.  She published numerous articles criticizing the United Nations.

Anyone at all interested in the wonderful novels and short stories of Shirley Hazzard will love this book.

Brigitta Olubas is a professor of English at the University of New South Wales, Sydney. She published the first scholarly monograph of Shirley Hazzard’s writing and recently edited two volumes of Shirley Hazzard's work: We Need Silence to Find Out What We Think: Selected Essays and Collected Stories