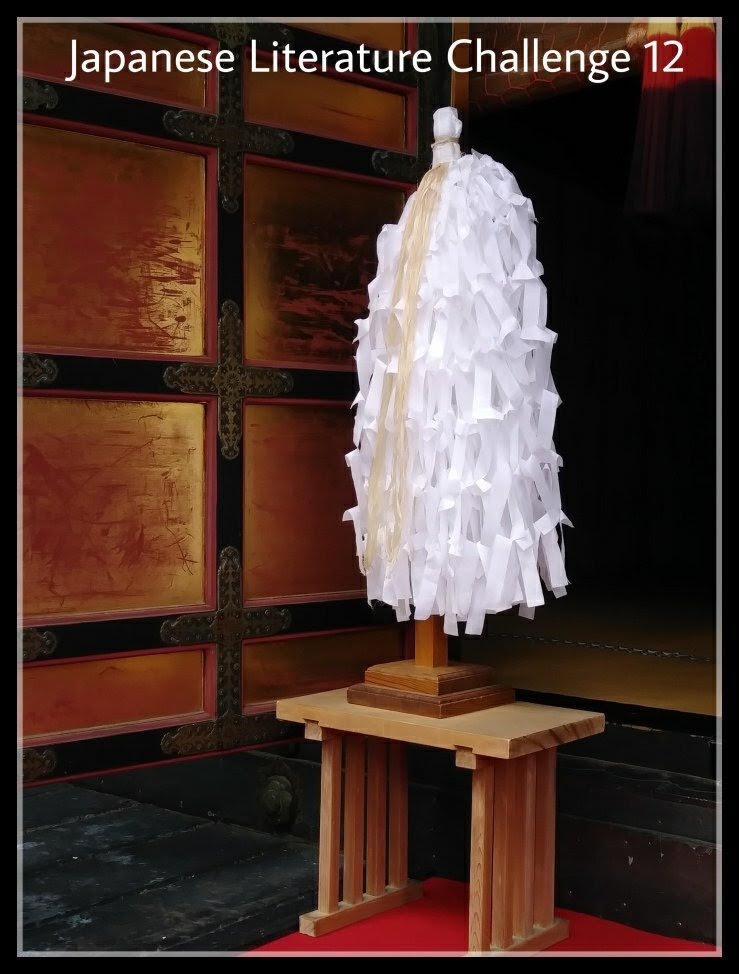 Included in The Cake Tree and other Stories by Akiyuki Nosaka

Please consider participating in Japanese Literature Challenge 12, this is my ninth year.  It runs from January 1 to March 31.  The homepage has lots of reading suggestions.

On July 18 last year I posted upon  great story by Akiyuki Nosaka, “The Cake Tree”, focusing on the very difficult timed of Japanese children living in very bombed out rural areas in late 1945, right after Japan surrendered. I decided then I should binge read the other fifteen stories in the collection but I lost sight of that goal, with so much I want to read.  Today's story, "The Whale that Fell in Love with a Submarine" renewed this intention.

"The Whale that Fell in Love with a Submarine", about a love sick sardine whale who has a problem:

"Sardine whales average about sixteen metres long, but our whale floating here so terribly listlessly was uncommonly large at twenty metres, and weighed in at thirty tons—and to make matters worse, he was a male. Unlike humans, female whales are bigger than males, and the bigger they are, the more splendid they are thought to be. And not just by the humans who hunt them for their meat and their oil, but by their very own fellow whales. For the males, it wasn’t so much a case of the smaller the better, but if like our whale they were bigger than the females, beyond what was acceptable, so to speak, then the females seemed to find them repulsive and refused to have anything to do with them....
Upon reaching adulthood, whales find a mate and travel the oceans together, giving birth to a baby whale once every two years. But this male was too big, and however hard he tried to attract a mate, emitting subsonic signals to alert the young females to a passing shoal of sardines or giving them gifts of shrimp, they simply ate their fill and then quickly swam away as if repelled at the mere sight of his enormous body. In other words, our whale was a complete flop with the ladies. It wouldn’t have been so bad if he’d just been bad-tempered or ugly—after all, there was some chance of finding a quirky female who was attracted to ill-natured males or odd looks. But being too big was a no-no. They were all scared of him."

We learn just how sad our whale is, you will like and identify with him, I did for sure.  He seems so nice.  I started out smiling at the start, by the end I felt so sad over the brutal fate of the whale, a gentle intelligent creature who would have made a great mate.

These lines were so moving:

"Overhead a never-ending stream of aeroplanes flew northwards and then returned southwards, sometimes belching thin trails of smoke from their engines or flying so low and unsteadily that it seemed they would crash at any moment. These were the American bombers conducting air raids on the Japanese archipelago far to the north, although of course the whale didn’t know this. There were also numerous ships, big and small, ploughing through the waves in a great hurry. When the whale was little his mother had taught him that, if he ever saw a ship, he had to quickly dive into the depths and stay down as long as his breath lasted, swimming as far away from it as he could. Even if the ship was smaller than him, aboard there was an extremely cruel type of animal called a human. Upon catching sight of a whale, these humans immediately took it for an enemy and gave chase, firing harpoons at it. She herself had twice barely escaped with her life, and the horror of those memories still brought tears to her eyes as she told him about them. “Had you done anything nasty to them?” he’d asked, unable to comprehend why the humans would hate whales that much. “Of course not! On the contrary, we are the most intelligent animals in the sea and quite capable of befriending humans,” she replied, adding with a sigh, “If they were just a little kinder, we could even save them when they get into trouble.” This was true. Whales have the biggest brains of all animals, and are very intelligent."

The whale encountered a small Japanese submarine, one intended to be used in suicide attacks on the American fleet.  The crew of the submarine heard the Emperor announce Japan's surrender and debated over what they should do.

Our friend thinks the submarine, the same color as a sardine whale, is a very big female, one that might be willing to accept him as a mate.  He begins courting the submarine.  When he rubs against the sub the  crew is very afraid he may  destroy the sub. I will leave the ending untold.

From this I left wondering about the largely intold story of the impact of war on animals.  Like small children, they are the wholly innocent victim.

I was also left very revolted by Japan's decision to resume commercial whaling.

Works I have So Far Read for Japanese Literature 12