As you can see Charles, is very excited over his role as Co-Editor of  The Reading Life.   His favorite book we have posted on so far is Dewey the Small Town Library Cat.   What are your books that Charles might like?   He is 18 and will not read just anything.   He thought the cat in I am a Cat was silly.    When he heard of Junichiro Tanizaki's Two Women and a Cat he felt it might be good to have two so he would never have to worry about his feeding dish being low or his chin needing rubbing.   As a kitten he loved The Cat in the Hat.    He was very happy to read in The Life of Johnson that Dr Johnson was a cat person.   He feels the most admirable character in the Harry Potter books is Argus Filch because of his extreme devotion to his cat, Mrs Norris.     He respects Sir Issac Newton for his invention of  the cat flap door (so his beloved cats could go in and out as they pleased).     He savors Horace Walpole's letters about his cats and is very excited to hear that the Broadway show "Cats", inspired by a work of T S Eliot , will soon be opening in Manila. 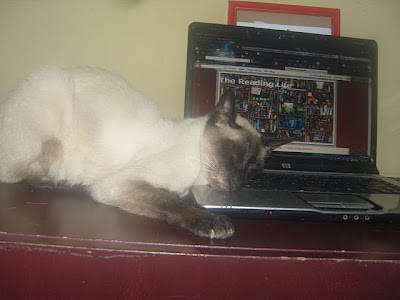 Charles reminds me very much of the Siamese cats in the cartoon Lady and the Tramp. And though they were a little 'evil', I especially liked them.

Michelle-Charles can be a bit evil at times, part of the charm of Siamese Cats-he is 18-88 in human years-his Brother Yoda passed away about a year ago

Charles would definitely like SkippyJon Jones. It's about a siamese cat who wants to be a chihuahua. "Holy Frijoles!"

This reminds me of the ludicrous account which he gave Mr. Langton, of the despicable state of a young Gentleman of good family. 'Sir, when I heard of him last, he was running about town shooting cats.' And then in a sort of kindly reverie, he bethought himself of his own favourite cat, and said, 'But Hodge shan't be shot; no, no, Hodge shall not be shot.'

Maybe Charles would enjoy E.T.A. Hoffmann's The Life and Opinions of the Tomcat Murr. :)

T.S. Eliot's Old Possum's Book of Practical Cats is a riot! I'm sure Charles would enjoy that one.

I reviewed it here:
http://sumthinblue.com/one-for-tomas-old-possums-book-of-practical-cats/

Those cats are so cute! Are they Siamese? Sorry to hear about Yoda.

I have an award for you over at my blog.

Lovely tribute. My Mum is the family's serious catlover, so I'll send her a link to this. I'm not sure which books her cats used to read.

And thanks Harvee for sending me here.