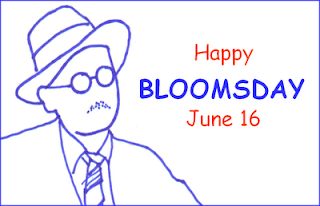 During Irish Short Story Week I   a number of people posted on a short story by James Joyce.   (Irish Short Story Week II is scheduled for March 11 to March 21, 2012-I hope lots of people will join in.)   I posted on his "The Sisters" on "The View from Mount Parnassus Day".    I also posted on Joyce's "The Dead" on Blooms Day June 17, 2010.     This week I want to post on a beautiful short work that goes deeply into the heart of a young woman, "Eveline"

Ulysses by James Joyce (1888-1941 Dublin) takes place on June 16, 1904.    Every year for a long time now Bloomsday (Leopold Bloom was the central character of the book) is observed in Dublin and elsewhere by oral readings of parts or even all of Ulysses in marathon  reading (OK and drinking!) sessions.      .

Whether or not Ulysses is the greatest novel of the 20th century is a matter of literary taste.   Vladimir Nabokov, whose Lectures on Reading I am now being edified by, says it is.    If you love it, if you hate it, or if you see it as  a work that can be read only by those with a serious literary education and lots of reading time,  it cannot be denied its place as the most influential novel of the 20th century (and so far nothing has come along in the 21th century to threaten this position).    About a year ago I began to overcome a life time misguided aversion to the short story as a literary form.   As I began to read various authors I decided I would read the very best short stories first so I would have something to compare others with.    Stories  in Joyce's  The Dubliner (1914)  were on almost all lists.

"Eveline", told in the third person, is about a young woman longing to be free but afraid of leaving the only place she has ever known and trapped by feelings of obligation to her family.     She is also somehow trapped by the things in her life.
Her mother is now dead, her father needs to be controlled.   He drinks to much and he used to beat his two sons.       Eveline takes care of the house and fixes the meals.     She longs to get away.    She also works at a store for a harsh woman who cares nothing about her.

Eveline has met a merchant marine.   My first impulse was to think Oh no she has fallen for a sailor in town for a few days.   There is a passage that seems to suggest that Eveline fears being beaten or worse by the father now that she is nineteen and has no one to protect her.    Joyce's prose is beautiful.

" She would not be treated as her mother had been. Even now, though she was over nineteen, she sometimes felt herself in danger of her father's violence. She knew it was that that had given her the palpitations. When they were growing up he had never gone for her like he used to go for Harry and Ernest, because she was a girl but latterly he had begun to threaten her and say what he would do to her only for her dead mother's sake. And no she had nobody to protect her. Ernest was dead and Harry, who was in the church decorating business, was nearly always down somewhere in the country. Besides, the invariable squabble for money on Saturday nights had begun to weary her unspeakably. She always gave her entire wages -- seven shillings -- and Harry always sent up what he
could but the trouble was to get any money from her father".

I do not wish to tell more of the plot of this brief short story.   As the story closes it seems to me that Eveline has made a mistake but one we can all relate to.

Joyce has compressed several lives into just four pages but really he has compressed much of the history of Ireland.    You can almost feel the loneliness of
Eveline in this story.

JoAnne @ Lakeside Musings  has a wonderful post on this story.

I hope everyone around the world enjoys Bloomsday and that we will all be back next year to observe it again!

I think one powerful reason there are so many wonderful 20th century Irish short story writers is that Joyce set the standard so high.

You can read it online HERE

Yes, I agree. It is a great little tale that in a few pages illustrates the classic problem: is she escaping from a bad situation to a worse one?

Happy Bloomsday, Mel! Thanks for the link - I loved this story.