"A Horse and Two Goats" by R. K. Narayan 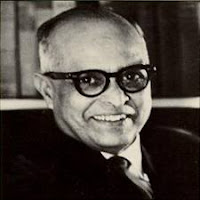 A Top of the Mark Short Story

R. K.  Narayan (1906 to 2001-India) is rapidly becoming one of my favorite authors.   In the last two months I have read and posted on thirty of his short stories from his 1947 collection The Astrologer's Day and Other Tales and two of his novels.     All of them are set in an imaginary  community he created, Malgudi, India (located in South Indian).    The more I learn about Malgudi,   the more I like it.    (There is some background information on Narayan in my prior posts.)

"A Horse and Two Goats" is just a flat out delightful in every way short story.   It is about an elderly,  poor man with two goats, a wife, little money and no children. He used to have a herd of forty goats, numerous sheep and even a few cows.    His  name is Muni.  Hard luck  has reduced him down to two scraggly goats.    He and his wife live in a small very minimal house next to a "drumstick tree".     I was not sure what a "drumstick tree" was so I checked.    It is a tree with super  nutritious seed pods in the shape of chicken drumsticks (OK we could have guessed that).    You can also boil the leaves for a tasty soup.     Though it is much tastier if you can throw in a vegetable or two or when very lucky a bit of meat.    The couple in part lives from this tree.

Narayan does a very good job depicting the relationships of long married couples.   In just a few lines he can make us understand their lives.   Maybe there was a time when the man was the boss  but those tines are long ago.    Muni's main occupation now is taking his goats for long walks where they can hopefully find something to eat.    His wife tells him do not come back until the goats are fed and he knows if he is gone long enough she will find some way to put together a meal for him.    If he stays out longer  maybe she will be in a good mood when he gets home.

One day the man is out for his walk with his goats.     Muni speaks no English.    A red-faced man in khaki shorts standing next to a fancy car asked him "where can I get some gasoline for my car.    I am out".    Muni has no idea what he is talking about but he knows a white man in khaki shorts next to a fancy car  probably means trouble if  upset so Mani more or less nods at whatever he says.    When the man offers Mani a cigarette, a pleasure he has not been able to indulge in for a long time, he begins to talk back to him but of course the man has no idea what Mani is saying.  The cigarette broke the ice for them.   Now the story just gets so funny when Narayan shows us what each of the men thinks the other is thinking.    As I read this I marveled at how Narayan could make the white man (an American on holiday with his wife) sound so right in his conversations.   We also see what each one of them is thinking the other is saying.   Anyone who has ever head a long  "conversation" with someone who they did not share a language with will love this story.

As the story proceeds the American asks Mani about a very old mud statue next to his car.    Mani has no idea what the man is talking about.   Somehow the American thinks Mani owns the land he is standing on so he is trying to negotiate a purchase price for the old mud statue (which nobody cares a thing about) which the Anerican thinks is an amazing artifact of an ancient culture (and it may well be such).    As they talk on and on Mani starts to think the man wants to buy his goats (he had shown him some money).    The American assumes Mani is very knowledgeable about the old statue and is trying to drive the price up.    The American wants this statue so badly he will go home to American in a boat while his wife flies back just to be sure the statue makes it back safely.    Mani never has a clue he is interested in the statue.    When they part the American gives Mani more money than he ever had in his life, enough for he and is wife to live on for years.    He leaves the goats with the man, thinking that is what he has sold.    What he really sold was the statue that he never owned in the first place.    I have already told a lot of the plot of this story but I have left untold the great ending.   Narayan is a genius at ending a short story (not always an easy thing to do).

I think this is my favorite Narayan short story so so.    (And that is saying a lot!)

Do you have a favorite Narayan work?

This is the only short story I've read by Narayan, so I suppose it is my favourite by default! I came across it a year or two ago in an old collection of "Commonwealth short stories". I loved the clash of cultures, and the way that to the old man the horse is an avatar to redeem the good at the end of the world, while to the tourist it's a commodity to be bought. And the young people in the world are "hardly aware of its existence"... Really enjoyed it. I'll have to search out that collection of stories that you've been reading.

Am studying "A horse and two goat" n i like the story but i prefer R.K Narayan's novels such as "The English Teacher" or "The Guide"...the language is easy to understand and there are interesting themes in both novels...

Nains. I love all of Narayan's novels I have read, six of the, and loved them all. I have copies of the two novels you mentioned and hope to read them soon. Thanks so much for your comment

Well as much as i have read abut Nararyan I believe he was no so simple as he wrote A Horse and Two Goats. If we look at the title we realize that it focuses onto the backbone of any country the Livestock. A horse is a symbol of Power and Strength which is in a direct contrast with Narayan's protagonist who is Muni. As his name suggests he is short not only in his name but also his Financial status. No one give him importance and he is as meek as the sheep. The author shows the reduction of the flock of forty to two which is in even numbers and which also shows that once there would be a time when he would be in control of his situation.
According to what i have deciphered; the themes are not as simple as they may seem. In a very simple manner and with less verbosity Narayan presents Stark difference between the rich and the poor, Caste system, the Cultural difference yet money being a translator, Social behaviors, comparisons of couples in India and America. America being the progeny of British and it taking advantage of those countries which were lower in the race for being successful.