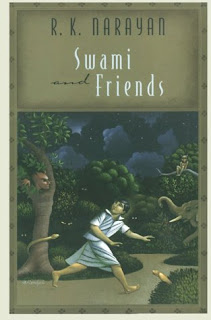 Swami and Friends is R. K. Narayan's (1906 to 2001-India) first longer work of fiction.    I began reading Narayan with the title story in his 1947 collection of short stories, The Astrologer's Day and Other Tales.    I then happily read the other 29 stories in the collection.    I agree with Jhumpa Lahiri in classifying Narayan among the great short story writers of the 20th Century.     (There is background information on Narayan in my prior posts).     Most of his fiction is set in the imaginary town of Malgudi, India.   Each story is a completely stand alone work but the more you read, the more you understand the world of Malgudi.    As I read the short stories and then The Man Eater of Malgudi I thought, "there is a good TV series in these stories" and then I found out there have been numerous TV shows, series, and movies made based on the world of Malgudi.    All of his stories are written in English and have their own beautiful rhythm.

Swami and Friends  centers on a boy in a private school.   This book is really one that should be read by those into Asian colonial fiction as it shows how the teachers try to turn the students away from the religion they were born into toward the religion of the English, Christianity.    The teachers (all Indians themselves) mock the religion of their students, equating it to idol and devil worship.    It was great to see the students fight back against this.   It is an all boys school (as I guess there were no mixed school) that is run as a profit making enterprise.    Some of the teachers are very dedicated, some oppose British rule and some totally adopt an attitude of complete servility in the hope it will allow them to advance.   We see concerned parents at school conferences,  we get to listen in as couples talk about their hopes and concerns for their boys,  and we get to hear a speaker demanding Independence for India.

The dominant passion of the boys is cricket.   It was a lot of fun to see them form the Malgudi Cricket Club and watch their big game against another school.

Narayan is a master at making people come to life in just a few sentences.   He is great at depicting relationships.   We see the shifting balances of power among the school boys (this may be a commentary on Indian politics of the 1930s). Malgudi might not be Bonbay but it is not isolated from politics.    There is real passion in this speech by an opponent of British rule who is trying to stir the emotions of the people of Malgudi  and I think it took courage to include it in Swami and Friends:


"We are slaves to-day,' he shrieked, 'worse slaves than we have ever been before.

Let us remember our heritage. Have we forgotten the glorious periods of Ramayana This is the country that has given the world a Kalidasa, a Buddha, a
Sankara. Our ships sailed the high seas and we had reached the height of
civilisation when the Englishman ate raw flesh and wandered in the jungles, nude."

Parts of this speech are beyond the understanding of Swami and his friends but they do understand this:

"'Just think for a while. We are three hundred and thirty-six millions, and our

land is as big as Europe minus Russia. England is no bigger than our Madras
Presidency and is inhabited by a handful of white rogues and is thousands of miles
away. Yet we bow in homage before the Englishman!"

Swami and Friends also deals directly with conflicts between Hindus (as Swami and his friends were) and people of the Islamic faith.   Of course Narayan did not know in 1935 of the millions of deaths that the Partition of India would produce but he knew there was a deep malaise along a religious divide even in Malgudi.

"He is a nice Mohammedan, belongs to our class.' 'In the Board High School?'

There was just a suspicion of a sneer in his tone. Swaminathan preferred to ignore
this question and continued, 'He has a bicycle. He is a very fine Mohammedan,
calls Mohammed of Gazni and Aurangazeb rascals.'
'What makes you think that they were that?'
'Didn't they destroy our temples and torture the Hindus? Have you forgotten
the Somnathpur God? . . .'
'We brahmins deserve that and more,' said Rajam. 'In our house my father
does not care for New-Moon days and there are no Annual Ceremonies for the
dead.'

There is a lot in this rich book I have not covered.    Narayan is great with conversations and relationships.    Swami and Friends ("Swami" is the name of the boy the story centers on) is easy to read and follow.    I like his prose style a lot.    This is a delightful funny book  from which there is a lot to be learned.

I would put it as near must reading for those interested in fiction centering around issues related to the British Raj.

I was sent this work and three other novels by Narayan by a very kind reader in New Delhi who wishes not be named.   I think I will next read The Printer of Malgudi.,

Good luck with this project. I have not read Narayan. I had no idea that there are TV shows and movies based on the Malgudis--how interesting!

It is a delightful book. It will make you laugh.
And it will make you wonder how RK Narayan managed to captue the world of a ten-year-old boy so precisely.

You can not deny that R. K. Narayanan is # 1 author when it comes to short stories and books with high social and moral values.This book is no exception.The story is great and flows smoothly.The author takes to pre independence time to children from different family background and the bond between childhood friends.This book is a great read.(y)

Rahul. I totally agree. Thanks very much for your comment and visit