"The Landing" by Anita Desai 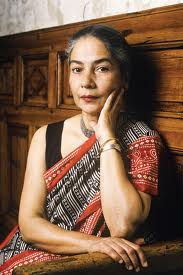 Anita Desai's (1937, Mussooire, India) mother was German, her father was a Bengali business man.   German was the language of her parents household but she also grew up fluent in Bengali, Urdu, Hindi and English.   Her literary language is English.   She has been short listed three times for the Booker Award and her daughter, Kiran Desai won the award.   Anita Desai has taught creative writing in numerous high prestige American colleges.   She is a fellow The Royal Society of Literature and Girton College in Cambridge.   She has also won numerous awards in India.   Much of her fiction deals with the lives of ordinary people in India and the hardships created by the 1947 Partition. 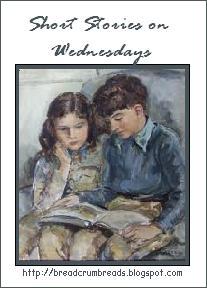 "The Landing" is a very simple story.   It could be set almost anywhere.  It is well written and interesting.   As the story opens a woman is moving into a very old house she has just bought.   You can tell she is proud to own a house built in 1743.   The date was carved into the wooden roof beam.    (That one could buy a house that old does begin to fix what are the possible locations of the story.)    As the woman enters the house she seems to feel strongly that she is not alone.   At first she thought she was in command of the house but soon she began to feel she was in fact under the command of the house.    Soon she began to feel something or someone was watching her.   She would return home from work to find the door unlocked when she knew she had locked it or double locked when she never did that.   She tried to talk to the presence but she got no answer.   Of course she began to doubt her sanity also.   She left out food for the presence but it was not consumed.   I will leave the rest of the plot untold.

This is just a simple story.   "The Landing" is not a powerful first rate story and it does not pretend to be.    I saw it as way to introduce myself to the work of Desai.   I will say I like the style but I am assuming there is much more to be found  in some of her other work.    I hope to read some of her novels soon.

Please share your experience with the work of Anita Desai with us-what is her best novel?

Thank you for reminding me about an author I should read.

A writer that although aware of, have yet to read any of.

Parish-there is so much to read and so little time

The way Desai describes the 'presence' makes every thought, and every feeling real. I found myself as the woman in the house, drawn by curiosity - an uncertain but intense curiosity.

I've read another short story of hers in my schoolbooks - called "A Devoted Son", and loved the gentle irony in the story as it explored the relationship of a father and a 'perfect', devoted son. What was truly masterful was that both father and son were right in the story, when you begin to look at things in one's way and the other's