Mikhail Saltykov (1826 to 1889 St Petersburg Russian-also known as Mikhail Saltykov-Schedrin) was born on the estate owned by his family, ancient Russian nobility.   He came early to love the reading life.   He attended a school for sons of Nobility where he began to translate writers like Byron and produce his own stories.     Upon getting out of school he entered government service.   His civil service career had its ups and downs but he ended up with  a pretty high positions as a  director of tax collection, probably as hated a bureaucratic position as there was in Czarist Russian in the provinces during the 19th century. 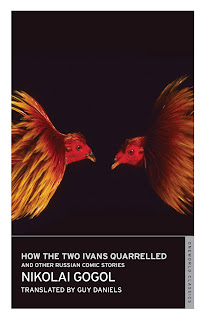 Saltykov was very productive as a writer.   His most famous work is his novel The Golovlyov Family (1876) which has been called the gloomiest work in the history of Russian literature (and if that is true it is saying an awful lot!)

Like Ivan Krylov he is mostly still loved for his fable like short stories.    I was very happy to see two of his stories were included in One World Classics edition of Why the Two Ivans Quarrelled by Nikolai Gogol and Other Russian Comic Stories as he is a new to me writer.     Saltykov's works are mostly thinly veiled jibes at the follies and life styles of the Russian provincial elite.   I really liked both of the stories of his I read a lot.   They are kind of like a fables working on becoming  short stories.   I concede from his painting one would not think he was such a funny writer!

"A Tale of How One Muzhik Looked After Two Generals"  is really a lot of fun even while it shows us the total contempt in which two Russian Generals (you did not work your way up in the ranks in the Russian Army under the Czar!) held the muzhiks (term for Russian peasant).    The two generals are kind of friends.   Neither of them has any conception how to do anything of a practical nature as they have always left that to the muzhiks.   I think it took either a bit of nerve (or some serious Imperial protection) to start a story like this in 1869 in Russia

"Once upon a time there were two generals.   They were both nitwits, and so in no time at all, by a wave of some magic wand, they found themselves on a desert island".

The two generals have no idea how to survive.   Sort of like dumb and dumber Romanov style.   At last they come up with an idea, find a Muzhik and let him do all the work.   They find one who is completely docile and subservient.   The generals treat him with complete contempt and abuse.   They barely see him as human.   As their reward for saving them when they get off the island they give him  five kopeks and a small glass of vodka.

"The Eagle as Patron of the Arts"  is pretty much an Aesop type fable told through animal characters.    It is a pretty direct attack on the conventions of Russian society.   It is a darkly comic tale in which those in powers are seen as blood thirsty raptors.   There are satirical references to a number of social functionaries. I think this story is also pretty much of a slam on the Russian literary establishment as embodied in St Petersburg elite literary publications.

An old translation of "A Tale of How One Muzhik Looked After Two Generals" can be found at Project Gutenburg.   I read it also.   It does not read as well as the translations in Why the Two Ivans Quarrelled by Nikolai Gogol and Other Russian Comic Stories.   I will be posting twice more on stories from this wonderful volume.   Both stories are translated by Guy Daniels.

I am really glad to have been introduced to Mikhail Saltykov and commend these stories to anyone at all interested in Russian literature.   Really anybody who likes a good story will enjoy these two works.

Email ThisBlogThis!Share to TwitterShare to FacebookShare to Pinterest
Labels: one world classics, Russian

I must say that he doesn't look much like a comic writer but the opening line to The Two Generals is quite funny. Thanks for the insight.