A Quiet Life by Kenzaburo Oe 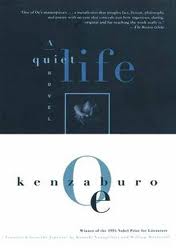 A Quiet Life by Kenzaburo Oe (1997, trans. by William Wetherall)

My Prior Posts on Kenzaburo Oe

A Quiet Life is the 18th work by Kenzaburo Oe (1935, Japan, awarded Nobel Prize 1994) I have read and now posted on.  Obviously I greatly like and admire his work.    I see him as one of the greatest of all contemporary novelists.  I think, based on my quick research, that I have now read of all his translated fiction.  He does have a large body of work still untranslated and I hope one day to read more of his work. 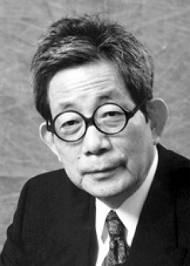 This is a very personal book.  It is told as the fictional memoir of the twenty year old daughter of a famous Japanese novelist who also has a severely mentally challenged twenty six year old son.    The son possesses, just as the real son of Oe, even though he is terribly handicapped a wonderful ability in musical composition.   There is also a younger brother.  The family life centers very much on the handicapped son.   The daughter does feel resentful, as anyone would.

The father is subject mental "pinches" (I am assuming this is something like a long term depression or "funk"). He has been invited to go to California to be writer in residence at one of the state universities for six months.   He has gone out of the country before to work at universities but this time his wife plans to go also.  The daughter thinks the "pinch" of the father has had bad consequences for her parents marriage and she thinks maybe the mother feels if they are alone for six months they can rebuild their marriage.  Her father, who does take charge of the care of the son, puts her in charge of him.

The father at times seems insensitive almost cold to his family, other than the one son.  A Quiet One, told in the form of a diary, is the daughter's account of what happens when the parents leave and she tries to cope with her brother and go to college.  Part of the theme of the novel, it seems to me this is one of the bigger themes of Oe and the post WWII Japanese novel, is how to deal with life in a world without faith, with no outside support for values.

The diary tells us about her challenges getting the brother, named Eeyore, to his workshops, enrolling him in swimming lessons and dealing with his epileptic seizures and other fits.   The daughter begins to wonder why her father and mother abandoned her like this.

There is a section in the novel where the characters go to see a movie by Tarkovsky about a stalker which mirrors a stalker who is after either Eeyore or the daughter.  There is also an interesting discussion of a novel about the crucifiction of Jesus.   K, as the father is called, is very into the work of William Blake, especially the prophetic books (this is also true of Oe).   It is almost as if he sees his son as a person from these books.

What A Quiet One really seems to me to be is a meditation of the author on his failures as a father and his own spiritual years in a faithless world.  If there is no religious text which can give foundation to a life, then one seeks it in obscure open to many meaning texts.  Oe also, this is not shown here, treats the work of Flannery O'Connor almost as holy works.

There are some exciting things that happen in the story.  The daughter almost gets raped, she helps capture a molester and we meet some of the father's famous friends.   There is a murder plot and intrigue at a private swim club.

A Quiet Life seems a work in which Oe is very hard on himself.   The emotions in the book are very subdued but run deep.   We can sense there is something wrong with the family, perhaps caused by emotional issues of the father brought on by the birth of his handicapped son.   There is  great pain at the center of this story.

The father in the story seems on the surface, and maybe deeper, to be selfish, and arrogant, using his knowledge of his own real brilliance to avoid his responsibilities.  On the other hand, he is in fact a creative genius and he clearly sacrifices greatly for his son.  He also neglects and does not seem to show a lot of interest in his daughter and his other son, eighteen.

I am very glad I read A Quiet Life and I am sad that I have now read, as far as I know, all of his translated into English fiction.  It is impossible for anyone into the work of Oe, to not see this as largely autobiographical, to his attempts to confess his inadequacies as a father and a husband.

There are many layers of meaning in this book, a Oe novel can take you as deep as you can go.  I found it near compulsive reading.  The book for sure made me think of my own failures as a father, my own emotional remoteness.  I think most fathers will be drawn to reflect on their own issues.

I will note that there are a lot of typos in the Kindle edition of this book, things any competent proof reading would have found.  It seems kind of a sloppy job of editing.

There are lot of good reading ideas on these webpages as well a links to great reviews by participants.

There is still time to participate in these events, all you have to do is read and post on one Japanese novel.

Just read my first Ōe, for January in Japan and think I will be tracking down the rest. A very, very powerful writer.
I read The Day He Himself Shall Wipe My Tears Away and am reading the three other stories in the collection Teach Us To Outgrow Our Madness too.

I must read more Oe soon - I've only tried two so far, plus a few short stories. Many of his works do seem to be autobiographical, but then that used to be a big tradition in Japanese writing (virtually mandatory at one point!).