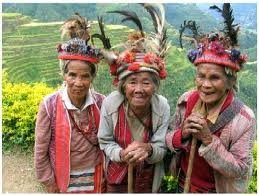 in partnership with
A Simple Clockwork

Prior Posts on short stories and history of the Philippines

Of the 1400 posts on my  blog, the most read are those on short stories by authors  from the Philippines.    Nancy from A Simple Clockwork and I have been posting on these stories, mostly focusing on older stories, for some time now.   We have provided lots of links where these stories can be read online.  Taken together, they make up a great inadequately explored resource for students of post-colonial Asian literature.   Most importantly, they are wonderful stories by real people writing about their heritage in honest heartfelt works. 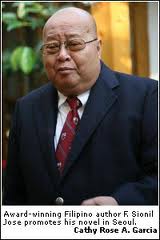 Francisco  Sional Jose (1924, AKA F. Sionil Jose) is one of the most highly regarded of all authors from the Philippines.   His  novels and his short stories deal directly with the consequences of political and economic colonialism, especially as it impacts the poor of the country.  Jose was born in Pangasinan Provence on the island of Luzon, as was my wife.  He attended, though he did not graduate, St. Thomas University as does my middle daughter.  He is of  Ifugao descent.  He is a national artist of the Philippines.  (There is a good article him in the online edition of The Manila Bulletin )

I think "The God Stealer" is the most read of his works.   (I will include a link where it can be read online at the end of my post).   It deals directly with issues vital to the heritage of the country.  There are two main characters in the story, an American, Sam Cristie and a man of Ifugao heritage who have become close friends though working at the same agency for a number of years.  For those not familiar with their culture, the Ifugao culture is one of the oldest intact cultures in Asia.   They are internationally famous for constructing over 2000 years ago the famous rice terraces which many consider one of the wonders of the world.    The terraces are now in real danger of being lost to the world.  To maintain them is very labor intensive and the young people of the culture can make more money working in Manila than they can in their birth communities   Of course a giant mega-city also seems more exciting to the young than a ten house village with no electricity.  Ifugao   practice a religion older than Christianity   Part of the story is the conflicts these forces engender in Philip who has taken on big city ways and converted to Christianity. 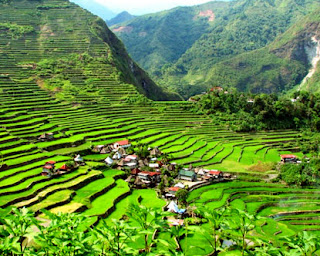 Sam Christie (his name seems to meant to bring two things to mind, "Sam" for Uncle Sam and "Christie" meaning a Christian) wants to see the famous rice terraces and he wants to purchase a small statue of an Ifugao God as a souvenir to take back to New England with him.   Philip gets word his grandfather is very sick and he and Sam make the long bus trip to his home village.  Jose does a great job of making us feel like we are along for the ride.  I wonder what the roads from there to Manila were like fifty years ago!

Sam is fascinated by the rice terraces, overwhelmed by their beauty and awestruck at what went into  building them over 2000 years ago.  At first Philip seems a bit embarrassed for his friend to see where he came from.  Philip is received coldly by his family, they regard him as a deserter to his heritage.  We attend a festival held in their honor, we meet the aging and ill grandfather, we learn about how the live, see the foods they eat and get  very good feel for the lives of the Ifugao people  in this powerful story.

I do not want to tell the ending of this story as it so meaningful in multifarious ways.

"The God Stealer"  by Francisco Sionil Jose should be read by anyone into post colonial Asian literature.  It was originally written, as are all the author's works, in English.  It shows a deep understanding of very real problems felt in ancient cultures all over the world.  How do you keep the young people rooted in the culture when they can make a lot more money, and have seemingly a more exciting life, in a mega-city?   This drama is being played out all over Asia.  It does not take a genius to one day see the cultures of people like the Ifugao  preserved only in vacation spots designed to give tourists photo ops.  ((100 pesos for a picture, please with statues of their Gods, made in China, for sale.)

You can read "The God Stealer" here.    If you have never read a short story by an author from the Philippines this is a good place to start.  If you have been reading them for decades, then lend is your expertise, please.

Nancy at A Simple Clockwork has some very illuminating posts on the literary culture of the Philippines and is perhaps the only place to learn about the literature of Cebu.

Thanks for the comment in my blog. I was actually thinking the same thing when I made that post about national artists for literature the other day and I was thinking of opening it up with you. Well, you beat me to it but I'm still glad you're okay with it. I will make my F. Sionil Jose post soon; I mentioned your post, by the way. The good thing about the national artists are they are multi-faceted; most, if not all of them, have written short stories so we are guaranteed with a good pile.

I really enjoyed this story, Mel. You're right, a great place to start reading Filipino literature. I have a calendar with the rice terraces, maybe the same picture; had my students write haiku based on the picture!

View ReView-you might also try "How Brother Leon Brought Home a Wife"-the rice terraces are in danger as the young people of the community would rather work in the bigger cities or off shore than on the terraces, which is terribly hard work. they are over 2000 years old.